A Sneak Peek At ‘The Expendables’ 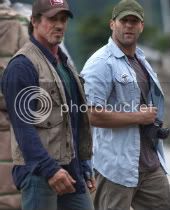 Sylvester Stallone’s upcoming movie “The Expandables” is being touted as the guy-movie-to-end-all-guy-movies.

And with the cast it has, it’s kind of easy to see why.

Not too much has been seen from the movie itself … well, until now.

A trailer was shown at the Venice International Film Festival and, luckily, Daily Motion has a copy of it.