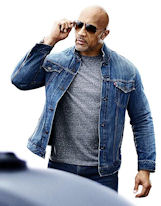 Forbes’ ranking of 2019’s highest-paid actors has been released, and occupying the top three of the list is the trio of Dwayne Johnson, Chris Hemsworth and Robert Downey Jr.

According to Forbes, Dwayne Johnson – who featured in movies such as “Fast & Furious Presents: Hobbs & Shaw” and “Fighting with my Family” – reported made about $89.4 million (£73.7m). Dwayne Johnson made most of his money from “Hobbs & Shaw,” which reportedly made an estimated $442 million (£364m) worldwide.

In 2019, we have had many great movies released, with “Avengers: Endgame” topping the list of the highest-grossing movies of 2019. Hence, it is no surprise that some of the actors who starred in the record-breaking movie would be named in Forbes’ list of best paid actors of 2019.

“Avengers: Endgame,” which earned $2.176 billion worldwide according to Forbes, got the duo of Hemsworth and Downey Jr. places in Forbes’ richest list for 2019. According to the publication, Hemworth, who starred as Thor in the MCU, made $76.4 million (£63m) for the year, while Downey Jr. made $66 million (£54m).

Fourth on the list is Bollywood actor and producer Akshay Kumar, who reportedly earned $65 million (£53.6m). In 2018, Akshay Kumar starred wonderfully in the comedy-drama “Pad Man,” which, according to Wikipedia, grossed an estimated $50.73 million worldwide. In 2019, he made approximately $65 million thanks largely to his roles in “Kesari,” “Mission Mangal,” “Housefull 4” and “Good Newwz.”

Martial arts don Jackie Chan was the fifth actor on Forbes’ list. The older the wine gets, the better it is, they say, and that’s the story of Jackie Chan in 2019. The Hong Kong-born actor reportedly earned $58 million (£47.8m) for his roles in movies such as “The Knight of Shadows: Between Yin and Yang,” “Viy 2: Journey to China” and “The Climbers”