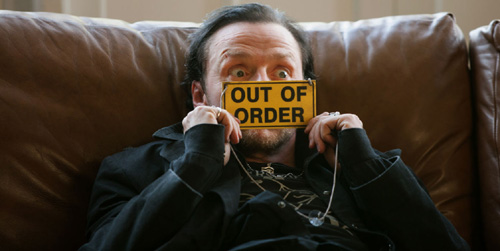 “The World’s End” is the final installment in the “Cornetto Three Flavours Trilogy.” Directed by Edgar Wright (“Shaun of the Dead,” “Hot Fuzz”) and co-written by Simon Pegg and Edgar Wright, the film is once again a turning on the head of a particular genre. While “Shaun of the Dead” was a satire of a zombie film and “Hot Fuzz” was a riff on the buddy cop genre, “The World’s End” is a fun take on the sci-fi genre, but it’s not exactly as straight forward of a parody as we have seen before.

Can Edgar Wright and Simon Pegg pull off a satisfying ending to three films that are connected but not directly by characters of even storylines in a way that can satisfy fans? Read on to find out.

Gary King (Simon Pegg) is a self-indulgent alcoholic who believes that the root of his unhappiness is his failing at a legendary pub crawl attempted by himself and his four closest friends in their late teens. Nearly 20 years later, Gary lives in the past, reveling at what his life used to be like in the hopes of getting back the notoriety he once had in his youth.

Determined to re-connect with his long-lost friends once more, Gary begins to track them down and interrupt their lives to the point they have no choice but to join him once again on his quest to conquer the “Golden Mile,” 12 pubs in a row where they consume a pint of beer in each. He somehow manages to get all four men onboard his plan to return to their hometown of Newton Haven and engage in a night of rowdy and debauchery full of brew and laughs.

As Gary and his friends Peter (Eddie Marsan), Steven (Paddy Considine), Oliver (Martin Freeman) and Andy (Nick Frost) head back home to Newton Haven, their night is just beginning as the town seems to appear exactly the same while the residents do not. Thinking that they were local legends, Gary is confused as to why it appears that none of the local Pub Owners appear to recognize them, but as the night goes on they will soon discover that things have not stayed the same in their absence and there is a hidden secret to the town that none of them could see coming. One thing’s for sure, this is a night that this group of friends will never forget.

As you can tell, we here at It’s Just Movies have been eagerly awaiting the arrival of this film, as we have written a series of stories about “The World’s End,” covering everything from trailers, film clips and interviews. Being a fan of Edgar Wright’s previous work, as well as the comedy style of Simon Pegg and Nick Frost, I was anticipating seeing them together again. Their dry wit and chemistry always shines through in any film they work on together. I was also intrigued by the notion of them taking on yet another genre of films and putting their stamp on it. And with Edgar Wright graduating to the big leagues by landing the directing job of Marvel’s “Ant Man” in 2015, I knew this could be one of his last smaller films for awhile. 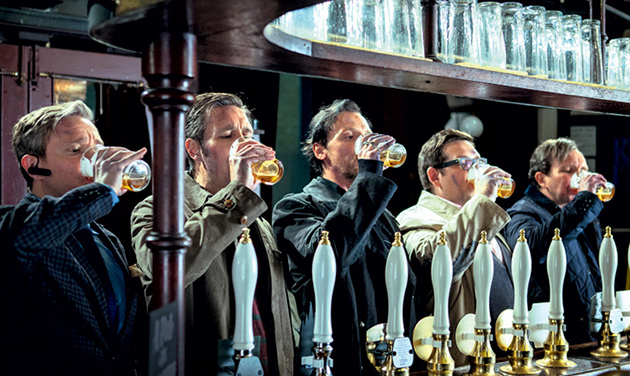 So how was the film? It’s pretty great, especially if you are a fan of the previous collaborations between Wright and Pegg and you love the satirical tackling of these well-known genres? Even those who have never seen “Shaun of the Dead” or “Hot Fuzz” can fully enjoy “The World’s End” as it is full of drama, comedy and some action as well. Of course, it will be beneficial to have a familiarity with this group of actors because there are many throwbacks for fans to enjoy and having any sort of knowledge of them will help you pick up on and appreciate these many moments. While not a sequel to the earlier films, “The World’s End” is a thematic wrap up, with new characters and a new story that finalizes and resolves aspects found in those first two films.

There is central theme of the film and it is that your hometown has changed, but is it because you got older or did something else happen? This question along with others is the driving velocity behind the storyline and it’s at the center of these friendships that have all but dissipated over the years. This film has heart, laughs and even hints at the darker aspects in each of us that could use a little work.

Simon Pegg’s Gary King is the main character for whom we root, but he is hobbled by his own desire to recapture the days of his youth, trying to go back to when he felt his life was at its best and he was popular and loved. His life has never amounted to anything, so he thinks that finally finishing this pub crawl might in some way bring him closure and a sense of celebrity. He is, in a small way, sort of a bad guy, lying and manipulating his friends to get them to do what he wants. Even when all hell breaks loose and the group is literally running for their lives, all he cares about it making it to the 12th and final pub. There are many negative things about Gary, but even with all of his faults I still felt myself rooting for him to succeed.

The other four friends are far more likeable and relatable, with most of them being married with kids. Another reason for my appreciation for this cast is that unlike past films, in which many of their characters have had similar traits, it feels like the roles played by Simon Pegg and Nick Frost are new and fresh and they inhabit them well. Rosamund Pike, on the other hand, enters the picture as a possible love interest, but she never fully inhabits that role as she is quickly thrown into the chaos.

There is a major twist in the film which you already know if you have seen the trailers, but I won’t spoil it for you if you haven’t seen them. But with this twist, we get multiple films in one, the typical British drinking movie, a road trip, a rift in friendships, a love story and, of course, the sci-fi twist. I won’t say that this is the best film of the trilogy, but I will say that it is a satisfying end. I think that I might appreciate it more with repeat viewings — such as was the case with “Shaun of the Dead,” a movie that I wasn’t the biggest fan of at first, but found to become funnier the more I saw it and got all of the jokes and silly sayings.

There were a few moments in “The World’s End” that felt clichéd, but thankfully those were few and far between and as a whole I laughed a lot during the movie. The pace is pretty spot on and picks up in the second half, leaving for very few dull moments. I liked the addition of all the special effects, which really helped to sell the twist and it’s good to know that Edgar Wright can handle dealing with this added layer as there are sure to be a monumental amount in 2015’s “Ant Man.”

So I would definitely recommend this movie to all and especially to dedicated fans as you are sure to have a good time.

“The World’s End” is in theaters now and is rated R for pervasive language including sexual references. The film also stars David Bradley, Pierce Brosnan, Steve Oram and Michael Smiley.