A music video for World War Z by Muse 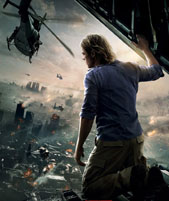 For a movie featuring both zombies and Brad Pitt, the hype surrounding “World War Z” seems pretty small. I have heard a number of conversations by people regarding which movies they are most interested in seeing this summer and — I don’t remember anyone really mentioning this one.

And, unfortunately, I can’t honestly tell you the music video for “Isolated System” by Muse is going to do anything to get people more pumped up. It’s pretty low key, kind of repetitive and a little sad. There’s a clock counting down during the video, which could be exciting, but it is clearly counting down to the end of the video.

As the clock counted down and the action started to ramp up, I kept hoping the song would kick in and get exciting, but it really never does. The action picks up visually far more than the song ever does, so you are left with something pretty strange.

On the whole, I would say this music video is worth checking out if you are really excited about “World War Z” and/or you are a Muse mega-fan.

“World War Z” – which stars Brad Pitt, Mireille Enos and Daniella Kertesz – will be released June 21. You can see the movie’s trailer by clicking here.