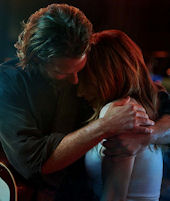 Perhaps Bradley Cooper thought he could get off easy by making his directorial debut an expanded MTV video. After all, having cornered the considerable singing talents of Lady Gaga promised to go a long way. As it turns out, Gaga, playing the lead part of super-star to be Ally, must act as well as sing. She does not act. Her singing is interspersed with mugging for director Cooper as he directs and mugging at actor Cooper as he plays the co-lead.

Cooper can act, but he has to have a few things going for him. He needs to be clean shaven and have hair that is short enough that we can see his face. His part in “American Hustle” was as marvelous as it was critical. He carried a big load in that film as FBI Agent Richie DiMaso and the energy and rapid-fire diction he brought to the part exemplified the essence of hustle. Casting him as a hairy faced, long haired drunk was a major mistake. Having said that, the story is not about him, it is about the rising star.

Lady Gaga is a great performer and this movie showcases her performances. She has the make-up thing down, and the costume thing and somebody on the crew knew how to shoot live stage scenes. Hence the great MTV video. Comparing her to other female leads who have played this role, and other similar roles like it, is a sad experience. The ongoing Streisand nose jokes are depressing, as is most of the screenplay. In place of Streisand’s real and severe stage fright, Gaga gives it lip service and then it evaporates in a hail storm of glitz before our eyes.

Bright spots are Anthony Ramos’ work as Ally’s super-bestie Ramon, Andrew Dice Clay’s subdued but hilarious performance of Ally’s dad, Lorenzo, and Sam Elliott as Bobby, Jackson Maine’s sidekick. Bobby is also his handler, keeper and, most importantly, the guy who explains to us how messed up Maine is. Although Cooper’s body language is plain enough, he suffers a case of drunken incontinence on the stage at the Grammys, his acting is so mired in a thousand hackneyed, mediocre drunk portrayals it hard not to write it off. The pants wetting, impossible to imagine, is still as good as Janet Jackson’s Super Bowl Nipplegate.

If the production would have cut the on-stage glam rock shots in half, cast Sam Elliott as Jackson Maine and Cooper as his hustling handler, the show would have been better. That way Cooper could have concentrated on the directing instead of mumbling and stumbling his way through the drunk role. Or perhaps Cooper as manager/producer Rez (a blessedly sharp and coherent performance by Rafi Gavron). The screenplay is complicated by descriptions of Maine’s brutish, drunken father and the effect he had on the rise, and fall, of the star to be. Also thrown in, perhaps to buck up the maudlin and sickly-sweet love scenes, is the world’s cutest and fluffiest dog. 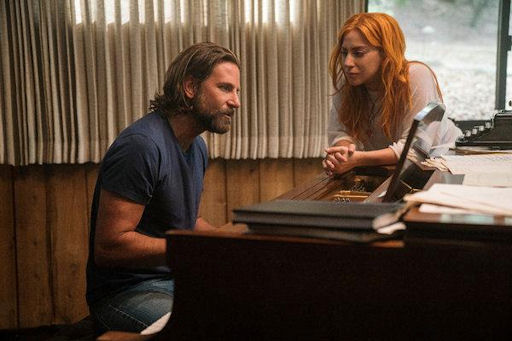