An Update on Wonder Woman and a New Costume Revealed

We have an update on the “Wonder Woman” TV series that didn’t get picked up by NBC.

The Hollywood Reporter had the opportunity to interview Warner Bros. TV CEO Peter Roth, who shed some light on the fate of the series and shared his personal opinion on what happened:

I think “Wonder Woman” was a very well-crafted pilot. But after seeing the announcement of the NBC schedule, I now understand and agree with [NBC Entertainment Chairman] Bob Greenblatt that it doesn’t necessarily fit particularly well with their schedule. As well crafted and contemporized as it was, it was a big and radical shift for viewers to embrace this new idea — and that may, to some degree, have had to do with why it didn’t make it.

Could we still get a Wonder Woman series? It’s not impossible, and some have suggested it being picked up by another network. To this, Roth said:

I’m just not sure yet; we haven’t given it a lot of thought.

Well, I don’t want to end this article on a completely sad note, so check out the just revealed third costume Wonder Woman would have worn in the show. Personally, this one is my favorite. It is obvious Adrianne Palicki is a beautiful actress and would have made Wonder Woman look amazing — as this picture reveals.

What do you think? Love it, hate it? 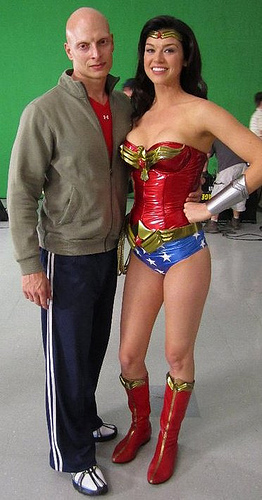