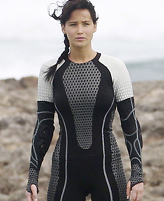 If you’re like me, you weren’t able to attend “The Hunger Games: Catching Fire” Comic Con panel in San Diego this weekend to see the newest theatrical trailer for one of the most anticipated films of 2013.

Don’t let that get you down though, because Lionsgate gave an exclusive release to Yahoo! Movies shortly after showing it at the panel for all the world to see and let me tell you, the trailer does not disappoint. Whether you are a fan of the book series or not, there is something in the new trailer for everyone.

There are several scenes taken from the teaser trailer, but this time around, the focus is on Katniss (Jennifer Lawrence), the decisions that she has made and the ones that she will need to make to protect her loved ones. As always, Katniss wants to protect her family and all those who cannot protect themselves, but as her younger sister Prim (Willow Shields) notes, things are different now. The common citizens now have hope, and they look to Katniss for the hope that once was not there.

On the other hand, Katniss has the issue of two men, Peeta (Josh Hutcherson) and Gale (Liam Hemsworth), being in love with her and she must pretend that she has no feelings for one while pretending to be in love with the other. Gale has more of a presence in this second installment and we see where he stands when it comes to the oncoming rebellion that was sparked with Katniss and Peeta’s decision to eat the poisonous nightlock berries so as not to have a Victor for the 74th Hunger Games. Peeta is grateful for what Katniss did to save their lives but cannot continue to pretend that they are more than they really are in front of cameras but are truly nothing once they go off. The charade must be kept up and neither one is sure that they can any longer.

President Snow (Donald Sutherland) on the other hand, sees Katniss as a threat to the standing government structures and must keep her line. Not only does Snow threaten her loved ones, but he has changed the rules and placed past Victors back into the arena so as to eradicate them as a threat, and to remind them that they are not invincible.

The 75th Hunger Games will be different this time around compared to the previous games that Katniss and Peeta were a part of, where only the Career Tributes were trained in combat. All the competitors of these games, however, are trained and experienced killers. Towards the end of this trailer, we finally get a glimpse of the environment of the Arena in which Katniss and Peeta will be thrown into, as well brief clips of the newer characters: Finnick (Sam Claflin), Gloss (Alan Ritchson), Enobaria (Meta Golding), and Johanna (Jena Malone).

The training arena is nothing like what I pictured it to be, but I have a feeling that the upgrades won’t disappoint. Not only does the trailer pull at the heart strings, it promises to make the blood pump from the exhilarating fight scenes that can only seen in the arena and throughout the Districts as riots and revolution begin.

Haymitch’s last piece of advice before Katniss and Peeta re-enter the Arena: “Stay alive” and to “Remember who the real enemy is.”

Watch the trailer below and let us know in the comments section whether the trailer was worth the hype and the long wait.