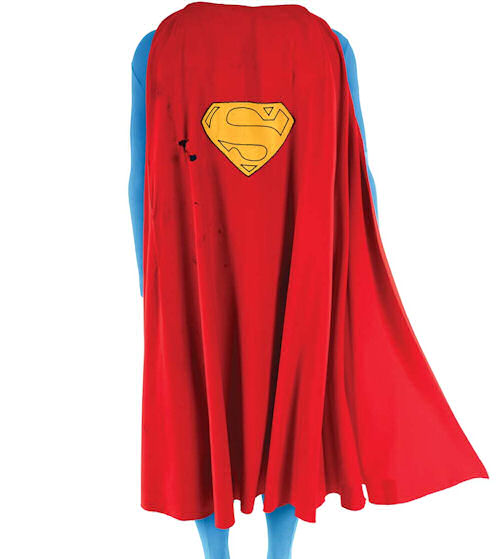 What is it about film and television memorabilia that interests collectors and fans? There could be many answers to that question, including buying up Hollywood props and wardrobe because you are pursuing it as an investment, or collecting for the sake of collecting.

Buying, selling and collecting Hollywood props is a pursuit that has popped up in the last 75 years or so, and it has captured the attention of millions around the world. But why? Perhaps it is because movie props and wardrobe embody the magic and enchantment of movies – knowing that a piece had its big moment on the silver screen, or that a movie star once used or wore a piece of Hollywood history. Whatever the reason, these pieces typically represent fond memories.

In a recent memorabilia article in the Hollywood Reporter, graphics and set designer and artist Michael Okuda says, “Television and film are our modern mythology, and these artifacts are touchstones of those myths,” he says. “The weight we attach to them is embodied by these objects.” Okuda worked on many of the “Star Trek” TV shows and films and more recently “Richard Jewell” and “The Mule.”

A wide variety of items, if authentic, can fetch top dollar in the collectibles market. Some of these many items include screen-worn wardrobe, signed checks, personal items owned or worn by a celebrity, props used in the production of a film, cars featured in films, set pieces or other items.

What Every Potential Collector Needs to Know …
If you are considering buying Hollywood prop or wardrobe, there are a few extremely important things to know and consider.

1. MEMORABILIA AND COLLECTABLES – There are a lot of items available on the market that are strictly “memorabilia.” That means they might possibly look like a piece you saw in a movie, but they have been created for mass distribution. Items in that category would include most movie posters, Indiana Jones fedora hats that have been made by multiple manufacturers throughout the years or even the iconic looking Hoverboard from the “Back to the Future” movies. Things that have been produced for mass consumption typically only have sentimental value.

2. MOVIE WARDROBE – A screen-used piece of wardrobe may be and probably is, one of multiple similar or identical items used during a film’s production. For the sake of illustration, let us take a shirt worn by Bruce Willis in “Die Hard.” Throughout most of the film the actor is wearing the same outfit. Exactly how many white tank shirts do you think Willis used during the production of the film? One? No, it was probably more like 100. The reason for this is that there need to be specific shirts for every stage of the film, and each shirt needs to look a certain way. When a piece of wardrobe is “prepared” for a scene, i.e. being intentionally pre-ripped, soiled, bloodied, etc., that is known as a “teched” piece. It is teched for the scene to look a certain way to match the action (or sometimes damage happens during production). It is typically “tagged” by the wardrobe department so that the specific wardrobe item corresponds to a specific scene and can be used again if it is needed for re-shoots or pick-up shots.

Taking it one step further, any stunt people or body doubles that had to work on Willis’s behalf on that film would also then need that same “teched” piece to shoot their scenes, too. It would not be a common occurrence where a film’s star and their stunt double would wear the exact same piece of clothing. So, if you were looking at buying an original screen-used Bruce Willis tank shirt used in “Die Hard,” you have to consider that although it has value, it may have a diminished value simply because there may be so many similar or identical pieces that exist and unless it has a costumer’s tag with it, figuring out exactly where it was used in filming would be extraordinarily difficult to determine. I personally do not have knowledge of existing “Die Hard” tank shirts but was only using that as an identifiable example.

On the other end of the spectrum is the red beaded gown worn by Kate Capshaw in the opening few scenes of “Indiana Jones and the Temple of Doom.” Legend has it there was only one gown for use by Capshaw during filming, which is mind boggling by today’s moviemaking standards. The rumor is it was damaged somewhere along the line. I personally have never seen that dress come up for auction anywhere and I believe it is in a private or museum collection.

A “hero” piece is one that received its up-close spotlight while used during a film or was extremely memorable for the scene in which it appeared. One such piece of hero wardrobe would be the pleated ivory dress that Marilyn Monroe wore when she stood over the subway grate and the draft blew up the bottom of her dress in “The Seven Year Itch.” The iconic image of Monroe’s billowing dress is perhaps even more iconic than the film itself. Late actress Debbie Reynolds bought the dress decades ago for $200 and most recently it sold for $4.6 million, plus a buyer’s premium back in 2011. In fact, at one time Reynolds had a massive collection of movie props and wardrobe, much of which used to be housed in her Debbie Reynolds Hotel Casino & Hollywood Movie Museum which filed for bankruptcy and closed in 1997.

One important thing to look for when buying movie wardrobe is provenance. Provenance indicates where something originated. Did it come from the wardrobe department of a specific movie studio? Did it come from a studio-authorized wardrobe clearing house? Did it come from an actor or actress who was gifted some/all of their wardrobe after a production? Or maybe it came from the actor’s brother’s cousin’s housekeeper who then gave it to their daughter’s best friend. Provenance is important and can be further bolstered by official paperwork, costumer’s tags, or a chain of custody that shows who has owned an item and where it has been since it was used. In any instance, provenance is key and goes a long way in determining the value of movie wardrobe. A hero piece is much harder to prove and will usually need multiple pieces of documentation, provenance, photos or more.

Another iconic movie prop includes the Maltese falcon from “The Maltese Falcon,” which sold of $4.1 million in a 2013 Bonham’s auction. The original screen-used falcon is notably authentic as confirmed by studio historians at Warner Bros. Studio. Why? During the filming of the movie, the actress who played Bogart’s secretary dropped the prop on Humphrey Bogart’s foot, bending the tail feathers of the statue and smashing Bogart’s toes in the process.

Another interesting prop is the King Kong model used for stop-motion shooting in the 1933 “King Kong” film. The 22” tall fully poseable model was made by Willis O’Brien and was created for the scenes where Kong was swatting airplanes out of the New York City skyline. Decades in storage were not kind to the prop that had once been covered in rabbit fur. Even so, the metal frame by itself fetched $200,000 in a 2009 auction. That’s right; a 22” metal frame was valued at that much solely for the fact that it is a piece of cinematic history.

A Good Investment?
If you would like to consider buying film wardrobe or props, do not be starstruck or let your emotions get the better of you. Do your research and ask a lot of questions. Also, consider the source from which you are purchasing. Some good sources of authentic wardrobe and props include The Prop Store of London, Movie Prop Warehouse or Premiere Props. Or grab your wallet and try your luck with some of the bigger auctions that deal in Hollywood items such as Julien’s Auctions, Sotheby’s or Christie’s Auction House.

Having movie wardrobe or props can be a fun hobby but remember that the value will only be as solid as your provenance. Also, if you do happen to own Hollywood items of significant value, you will need to have a valid appraisal so that the item can be properly covered by your homeowner’s insurance. Or you may even need a special rider on your homeowner’s insurance to cover items of a certain value.