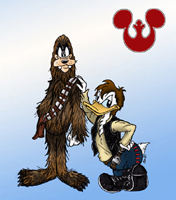 On April 1 of every year, plenty of otherwise responsible websites like to put up stories that are 100 percent fictional as April Fools’ gags. Reading the following news felt to me like one of those times. Not only has The Walt Disney Co. purchased George Lucas’ Lucasfilm for $4.05 billion in a stock and cash deal, but the studio plans to release “Star Wars: Episode VII” in 2015.

The sale of LucasFilm is one surprise in its own right – not shocking, but a mild surprise. However, the upcoming release of a new “Star Wars” movie (only three years from now!) that continues the franchise is the real stunner here. The “VII” in the title places this film sometime after “Return of the Jedi,” meaning this isn’t a spin-off or a Boba Fett solo adventure, but another chapter in the series.

Here’s what Lucas had to say about the deal in a press release:

For the past 35 years, one of my greatest pleasures has been to see “Star Wars” passed from one generation to the next. It’s now time for me to pass “Star Wars” on to a new generation of filmmakers. I’ve always believed that “Star Wars” could live beyond me, and I thought it was important to set up the transition during my lifetime. I’m confident that with Lucasfilm under the leadership of Kathleen Kennedy, and having a new home within the Disney organization, “Star Wars” will certainly live on and flourish for many generations to come. Disney’s reach and experience give Lucasfilm the opportunity to blaze new trails in film, television, interactive media, theme parks, live entertainment, and consumer products.

Imagining what a “Star Wars” movie would be like if given to other film-makers has been a longtime conversation point among fans of the franchise. Now, it appears we are finally going to see what that looks like.

I’m sure we will have more on this fascinating story as it develops. For now, what are your thoughts? What do you want to see in a “Star Wars” sequel? Do you have a dream filmmaker in mind as a director?