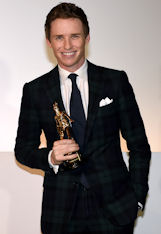 The House of the Trident chose to award a young talent with the commemorative statue of the Fountain of Neptune in Bologna, the precious monument that inspired Mario Maserati to create the famous logo in the form of a trident, which continues to be the distinctive symbol of the company 100 years later.

Representing the House of the Trident, Luca Dal Monte, director of external relations and press at Maserati, presented Redmayne with the award for Best Breakthrough Actor. Redmayne was selected for his performance in the film “The Theory of Everything.”

The film, which sees Redmayne in the role of a young Stephen Hawking, was screened in an exclusive preview following the bestowment of the award.

Tags: "The Theory of Everything", Eddie Redmayne
Posted 26 Nov 2014 by Guest Writer in News