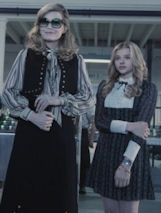 Tim Burton has secured himself as a staple in the movie world and as one of the most unique and talented directors with a particular style and approach to movie making. It just so happens that many of Burton’s biggest films have also starred Johnny Depp. Well. the two are together again — in their eighth collaboration — a dark, gothic, dramedy film version of the popular “Dark Shadows” television soap opera that ran from the late ’60s to the early ’70s.

Warner Bros has released eight clips from the movie — which we have below — but first a basic storyline breakdown.

In 1752, Joshua (Ivan Kaye) and Naomi Collins (Susanna Cappellaro) sail from Liverpool, England, to North America. Their son, Barnabas (Johnny Depp), grows up to be a wealthy playboy in Collinsport, Maine, and is the master of Collinwood Manor. He breaks the heart of a witch, Angelique Bouchard (Eva Green), who turns him into a vampire and buries him alive.

In 1972, Barnabas is accidentally freed from his coffin and returns to find his once-magnificent mansion in ruins. The manor is now occupied by Barnabas’ dysfunctional descendants, and others — all of whom are hiding dark and horrifying secrets. There is the family matriarch Elizabeth (Michelle Pfeiffer), Elizabeth’s rebellious teenage daughter Carolyn (Chloë Grace Moretz), Elizabeth’s brother Roger (Johnny Lee Miller) and his precocious 10 year-old son David (Gulliver McGrath), governess Victoria Winters (Bella Heathcote), Elizabeth’s live-in psychiatrist Dr. Julia Hoffman (Helena Bonham Carter), and the manor’s caretaker and groundskeeper Willie Loomis (Jackie Earle Haley). As Barnabas comes to grips with this new time, he realizes he might be the only one who can save his family and their failing business from ruin.

Our first clip takes us into the film soon after Barnabas is released from his imprisonment of nearly 200 years. Hereturns to his home and runs into Willie. He attempts to hypnotize an apparently drunk Willie and their exchange back and forth is quite comedic.

The second clip has Barnabas entering the house and meeting Carolyn and David. There is some confusion as to who they are and he mistakes Carolyn for something she is not. They recognize him from the portrait over the fireplace just as Elizabeth walks in and warns the kids to keep their distance. After learning his name, Elizabeth doesn’t seem the slightest bit surprised to see Barnabas and asks for a word in private. This tells me that Elizabeth is very aware of the history of the family and knows more then we think she does.

Up next, we see a very outdated Barnabas telling the family that they must throw a glorious ball in order to reintroduce the family as one with power and distinction. He is quickly taught by young Carolyn that balls are not hip anymore and that they must throw a “happening,” including the obvious mirror ball, lots of booze and the rocker Alice Cooper. This clip really shows us the disconnect he has with this time and the family’s attitude towards him as they mock him and he doesn’t even know it.

Another thing that any modern man knows is that it is never polite to ask a woman her age.

On an encounter alone, Victoria addresses the feelings that Barnabas obviously has towards her, and he admits them though he has not told her. She tells him that for some reason she feels she has known Barnabas forever and that something in Collinsport has been drawing her to the town. It’s a nice scene between the two showing us the budding relationship the two will have during the film.

In this sixth clip, Dr. Julia Hoffman confronts Elizabeth with the fact that Barnabas is a vampire. She admits that she learned his secrets using hypnosis. She is enraged that Elizabeth knew of his origins from the moment he arrived and she allowed him to stay. Elizabeth uses Dr. Hoffman’s curiosity to turn the tables and change her rage into curiosity for studying Barnabas instead of telling the secret to anyone else.

In the penultimate clip, we see the introduction of Angelique and her re-introduction to Barnabas. He describes the horrors of being locked in a box for a few centuries. He threatens to reveal her secret to the town, but she tells him how times have changed and she is in control of the town. She also admits to being responsible for the downfall of the Collins family from the mighty place it once held.

In the eighth and final clip, Barnabas describes the horrors of killing, not because he wants to but because he is compelled to do so. He asks Angelique why she would she put this horrible curse upon him, and the short answer is that she was mad he didn’t love her in return. She threatens his new love interest, but offers him a deal to rule the town together or else she will imprison him in the coffin once again. When he denies her once again, she shows that she wasn’t joking around.

All of these clips focus mainly on Barnabas and his interactions with the family, but none of the major secrets are revealed in them. I think Tim Burton wants to keep the mystery and thrilling moments of the film under wraps until its release. Once again, the Burton-Depp team up has produced a dark, comedic film that I am sure will excite the fans of the classic series while drawing in an entirely new generation of fans.

Are you a new or old fan to this story and will you be seeing it in theaters this Friday?

“Dark Shadows” is rated PG-13 for comic horror violence, sexual content, mild drug use and language and raises itself into theaters this Friday, May 11.