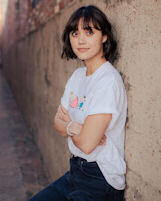 The new movie “I Hate New Year’s” is a sweet holiday film that will have viewers cheering for friendship and love. In the movie, real-life singer Dia Frampton portrays rising music star Layne Price, who encounters a bout of writer’s block. After visiting medium Zelena, as deliciously portrayed by Candis Cayne in a fun dual role, the singer returns home to Nashville to make peace with her ex-girlfriend and visit her best friend, Cassie, portrayed by Broadway actress and Nickelodeon alum Ashley Argota. What ensues is a journey of discovery framed by the holidays, culminating in a New Year’s Nashville excursion where Layne Price finds love once again in a place she may not have expected.

Although many people may remember Frampton from the inaugural season of “The Voice” in 2011, where she was the runner up, she has continued to grow in her music and has become busy with acting, too.

“I Hate New Year’s” is proof she has some pretty solid acting chops and can move easily between drama and comedy. As scheduling, luck or fate would have it, “I Hate New Year’s” wrapped filming prior to quarantine with almost not a moment to spare. Frampton has been using lockdown/quarantine/downtime to continue creating, although admits to a common pitfall that so many others have experienced in the past nine months.

“I had a few months where I just gained weight and felt sorry for myself,” explains Frampton. “Then I got back on the horse and I think people realized, and I’ll include myself in ‘people,’ this thing was staying around for quite a while.” She initially brushed off the idea of ZOOM and waited for things to go back to normal quickly. “My sister had a birthday in April and I remember saying, ‘I’m so sorry that you have to have a COVID birthday,’ not knowing that all of us were going to be having COVID birthdays because this has lasted for so long!”

“I started working on music with my sister Meg,” explains Frampton, who is in decade-plus long band Meg & Dia. “Meg is in Austin, Texas right now and we’ve been playing ‘telephone’ with songs. She’ll send me a guitar idea, then I’ll send her a vocal idea over the guitar… It’s been an epic game of ‘telephone’ with songwriting.” Frampton has also been fielding numerous acting auditions coming her way each month.

“I Hate New Year’s”
“We shot it this year!” says Frampton of her new film “I Hate News Year’s.” “The last maybe two or three days of shooting COVID started happening. It was a chaotic time.” She had booked an Airbnb for the week after the film wrapped because she loves the city so much. “I just remember us all being really confused… It’s like everyone was texting me to buy toilet paper on Amazon!” she recalls of the crazy time. “If the film had gone three or four days longer, we would have had to shut it down.” After one day in the Airbnb, she sensed it was getting bad, grabbed the toilet paper in the house and hit the next flight out, fearing that airports might soon be closed.

Frampton initially read the script for “I Hate New Year’s” while she was touring with Meg & Dia, the musical group she has with her older sister. “When auditions come in and I’m on tour, it’s so hard because we have such a tight schedule. We’re driving eight hours to the next city, and we have sound checks and there is no privacy and no quiet rooms.” She was a bit under the weather and was feeling tired. Remarkably, that state put her in a “place” where she could properly portray the character of Layne Price, even if she didn’t know it at the time.

“That weird sort of ‘tiredness’ dropped me into Layne,” says Frampton, who is normally a high energy gal. “It dropped me into her grounded more conservative energy. When I read the script, I just loved the story. I love feel-good holiday movies where I can put them on and drink eggnog and make cookies.” She then went on to compare her love of the holidays like Will Farrell’s character of Buddy in the movie “Elf.”

“I have three queer sisters who often felt invisible growing up in high school – especially in Utah,” explains Frampton. “That was difficult for them. They definitely got bullied and had a hard time with things. They would always chime in on different TV shows they liked, and it was interesting to see what they gravitated toward… Like my little sisters are so excited for the Kristen Stewart holiday movie and they just love her. They just feel so seen when they see those kinds of stories.”

“I experienced that in my own way,” says Frampton. “I’m not saying that I felt that kind of pressure that someone would feel growing up queer, especially in a small town in Utah. I’m not comparing it to that, but I did feel a little bit invisible as far as being an Asian-American in the industry. I never saw someone like me in a leading role. Especially as a Korean-American, I didn’t see it very often and it felt far away.”

She continues, “This movie checked off a lot of boxes for me, especially working with Ashley – another fellow Asian-American, and having it be a queer holiday love story. My little sisters are so excited to watch it. I just hope that more stories like that can be told. It’s not a movie about coming out and it’s not a story about being Asian. It’s just a love story.” It’s important to Frampton to be able to remove those “frames” and normalize everyday human experiences.