Gravity: A Pair of Extended Clips 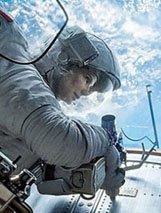 Warner Bros. Pictures is not fooling around when it comes to the promotion of the upcoming space thriller “Gravity.” Hot on the heels of the release of the two-minute clip/trailer, “Detached,” we have been given even further insight into this crazy action thriller in the form of two all-new extended clips, both nearly two minutes long.

“Gravity” is the harrowing tale of Dr. Ryan Stone (Sandra Bullock), a brilliant medical engineer who is finally able to make her first trek into space, along with veteran astronaut Matt Kowalsky (George Clooney) who happens to be on his last space walk. When a meteorological collision sends debris careening towards the space shuttle Explorer and the crew, disaster occurs as the shuttle is heavily damaged and the crew is separated in space.

The senior officer Kowalsky must use all of his skills and expertise to reunite with his crew and find a way to get them safely home. With oxygen and fuel in their space suits running low, it’s a race against time and gravity to try to survive.

The first all new clip is “Drifting” which takes place shortly after the collision and we get up close and personal with Dr. Stone as she spins mindlessly out of control through open space. Watching the clip, you get disoriented as you see flashes of the Earth and then the blackness of space all around her. As the clip comes to an end, the camera lets her just float away from the screen which embellishes the thought of space growing between her and her comrades.

This second all-new extended clip is called “I’ve Got You.” It takes place after the previous clip when Matt Kowalsky has managed to find and rescue Dr. Stone from her uncontrolled streaking into outer space and with his last bit of fuel in his MMU (Manned Maneuvering Unit) he thrusts the two towards what appears to be a satellite.

With an unrestrained trajectory towards the object, the two are desperately attempting to grab onto anything that will anchor them to the satellite and temporarily give them somewhere to think and regroup. When their tether to each other is broken, they must do anything and everything to grab onto each other and not let go.

I was lucky enough to see the original trailer in IMAX 3D before my showing of “Pacific Rim” and one thing these amazing clips do no justice to is the use of 3D in the film. Much like with some of the best 3D films, “Gravity” uses the 3D to create a sense of immense depth between characters and objects, all of which adds to the danger and immenseness of space.

Directed by Alfonso Cuarón (“Children of Men,” “Harry Potter and the Prisoner of Azkaban”), this film looks incredibly thrilling and his use of space — no pun intended — will be put to good use in a film that uses the space between objects and people, where being away from everything around you literally means death.

I love the concept of this film and where there won’t be the typical bad guy, the vacuous reaches of space are the enemy and our main characters have no one to rely on for their salvation but themselves. I can tell you that this is a film that must be seen in theaters, on the big screen and in 3D to do the director’s vision justice. While the majority of the film will be computer-generated images, it looks so flawless in everything I have seen so far that I don’t mind one bit.

Although I don’t think “Gravity” will do much to help the burgeoning market of people who want to make space travel easy and possible for the everyday person, it should do a lot to make you hang on the edge of your seat for each new breath to be taken by our stars.

“Gravity” drifts into theaters Oct. 4. It will be available in 2D, 3D, and IMAX 3D for your viewing pleasure.