Ever since I attended 2012’s San Diego Comic-Con and was able to attend the “Iron Man 3” panel, I have had high hopes for the film and it’s clearly darker and edgier tone. Gone were the fears that it would become another “Iron Man 2,” with hopes that it would mix the humor of the original film with an emphasis on the darker trials and inner demons of Tony Stark, much like Christopher Nolan’s The Dark Knight trilogy.

My suspicions about the film were confirmed when we got an awesome first trailer back in October, but where has all the new promotional material been?

Well, we have an official poster for “Iron Man 3” as well as a teaser for the new trailer that will be debuting during Super Bowl XLVII this Sunday, Feb. 3.

Just to recap the plot of the film, here is the official synopsis:

When Stark finds his personal world destroyed at his enemy’s hands, he embarks on a harrowing quest to find those responsible. This journey, at every turn, will test his mettle. With his back against the wall, Stark is left to survive by his own devices, relying on his ingenuity and instincts to protect those closest to him. As he fights his way back, Stark discovers the answers to the question that has secretly haunted him: does the man make the suit or does the suit make the man?

In the official poster from Marvel, we are getting a real sense of the tough times that lay ahead for Tony Stark (Robert Downey Jr.) as he is seen falling from the heavens without his helmet. His armor is damaged and he is even on fire. He is undoubtedly in peril. Tony Stark will have to battle much more than just personal demons in this third film if he hopes to survive and keep those close to him safe. 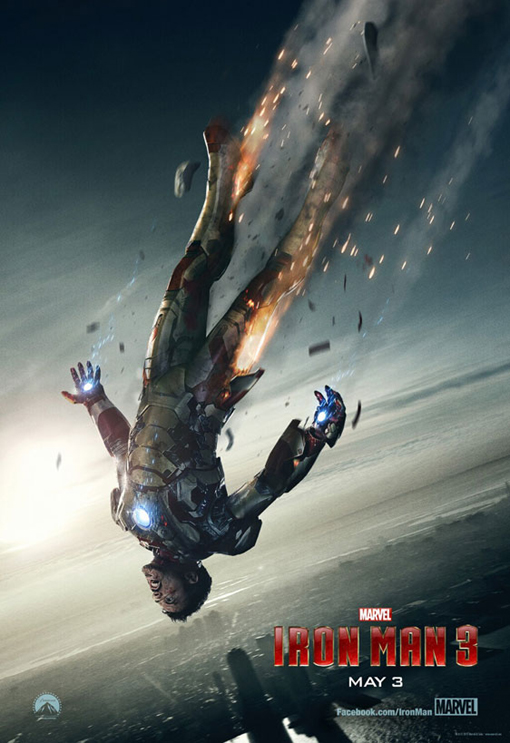 The quick teaser for the full-minute trailer that will be unveiled come Sunday is essentially the same footage as we have seen in the teaser trailer, but with just a few new quick shots thrown in. Some of this includes a look at James Rhodes (Don Cheadle) donning the new Iron Patriot-inspired War Machine armor, and a look at Aldrich Killian (Guy Pearce), a character who is pivotal to the plot in the film as he is the creator of the “Extremis” nanotechnology that helps the super villains Tony will be battling, besides the war he will be waging against his ultimate nemesis, the Mandarin (Ben Kingsley).