There are a couple actors out there, and I think this rings true for everybody, whose films you will go see regardless of what it is, even if you have no idea what it’s really about. For me, Toni Collette is one of those actors. 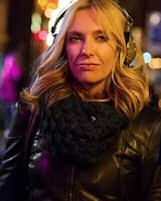 I am insanely biased when it comes to her, because I personally feel she is one of the most talented people in the business today. When I first heard about “Lucky Them,” it really didn’t matter to me what the film consisted of because it stars Toni, so for me, this was an easy sell. For others, that may not be the case, so I delved a little deeper so that I may pass on my impression in as little a biased way as possible.

So what is the story behind “Lucky Them?” The film follows rock journalist Ellie (Toni Collette) in her pursuit of a former love and former rock god, much against her own judgment. Her boss Giles (Oliver Platt) does not so much as give her a choice in the matter. Do the story on this guy or Ellie will be without a job.

Helping her on her quest to find her ex-boyfriend is a quirky documentary filmmaker played by Thomas Haden Church. Simple enough premise, and obviously we discover that there is a reason Ellie didn’t want to pursue this story. Was it a bad break up? Maybe she felt like he was the one that got away? Whatever the reason, I fully defend Toni Collette here because I feel like she can represent the emotional side of an otherwise basic plot.

Through the character of Ellie, the story can become about much more than a magazine article. Speaking from personal experience, once in a blue moon you encounter someone or interview someone who is just, special. However, once in an even rarer blue moon, someone recognizes your worth as not only a writer and interviewer, but as a person. It’s a very unique dynamic that is experienced between interviewer and person being interviewed. It’s a bonding experience, and a cathartic one at that, and all of that exists before you factor in the added baggage that comes with encountering an ex lover.

A common assumption is that the subject of an interview is the more vulnerable party. Not to say they aren’t lending themselves to vulnerability in the way they choose to answer questions or what parts of themselves they are willing to expose, but the writer is equally vulnerable. This can only be portrayed, however, if the chemistry on screen is spot on. A film such as “Lucky Them” is completely reliant upon the chemistry between Ellie and her old flame as well as Ellie and the documentarian. Will it add up?


Trailer for Lucky Them on TrailerAddict.


Upon looking at the trailer, I have to say I find the relationship that is formed between Ellie and Charlie to be quite intriguing. I get that whole road trip, pals in the end vibe with them, a bit corny but endearing enough to drive the plot. I also sense a new love interest for Ellie, without which, how would any main character ever be able to put the past into perspective? And then there’s music, I can only hope that the universal language of the world, music, plays a part in the film as far as the connection the music has, and the power music has to engage people. I hope for a stellar soundtrack and some memorable lyrics thrown in the mix.

“Lucky Them” started in the festival circuit in late 2013, and has been making the rounds through May of this year. A limited release in New York occurred on May 30 of this year. The film is rated R for language, drug use, and sexual content.

I can’t wait to see this movie for a number of reasons — Toni Collette, the theme, the subject matter — a lot of it hits home. But also, I found a hidden gem upon closer inspection. The old flame of Ellie’s that I have referred to, well that character’s name is Matthew Smith, and the role is credited to Johnny Depp, who started out on the rock scene. It makes sense, it makes me smile, it makes me want to watch the film right now.

Films like this are sometimes the cream of the crop and not a lot of people have heard of them. I am guilty in this instance, I had not heard of “Lucky Them” and I am so very glad that I now have, and hope it’s a good flick and more people become aware of its existence.