For a little while there, it looked as though the sequel “Mortal Instruments: City of Ashes” wasn’t going to see the light of day. However, after receiving a tremendous amount of support from fans in the blogosphere and fan mail, the production company Constantin has decided to move on with a sequel to “The Mortal Instruments: The City of Bones.” 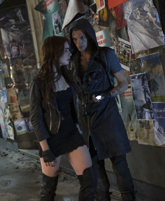 Even though the author of the books, Cassandra Clare, supported the changes that were made from book to screenplay, fans and book purists were unhappy and overall reception of the film in theaters was less than stellar. Granted, there will always be those who do not agree with changes, but there were enough fans out there to convince Constantin to decide on a go ahead for the next film in the series. Perhaps with a second attempt with the series, they’ll get it right.

Hopefully in this second attempt, Constantin will change its marketing strategies (taking some tips from Lionsgate and Summit Entertainment maybe?) and think more carefully about the script, casting and overall style of the sequel. The series is titled “Mortal Instruments,” but fans weren’t introduced to as many as were introduced in the book series, nor was there a variation in the scenery compared to what was described in the novels.

Production will commence next year, so Constantin has some time to think about strategies to make a more successful film. While it is safe to say that the main cast members will return, the production company will be faced with some possible scheduling conflicts. After all, Lena Headey is currently filming the hit HBO series “The Game of Thrones” and Johnathan Rhys Meyers is starring in NBC’s “Dracula” for the 2013-2014 television season, as well as all the other cast members taking on numerous other projects throughout.

The next book in the series introduces more characters, so hopefully the casting will be a vigorous one to find the right actors for the roles.

Until then, however, keep an eye out here for more updates.