Marvel has produced a lot of high-grossing superhero films, such as “Iron Man,” “Guardians of the Galaxy,” “The Avengers” and, most recently, “Doctor Strange,” which featured “Sherlock star” Benedict Cumberbatch.

Marvel, however, hasn’t been without its hiccups, as it’s had many flops at the box dffice in recent years. One of these movies was “Daredevil,” which starred one of Hollywood’s most popular actors, Ben Affleck. 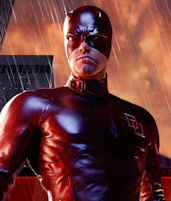 While Affleck was highly praised for his portrayal of the Dark Knight detective in “Batman v Superman,” movie critics were less forgiving when he played the role of Daredevil back in 2003. According to one critic, Affleck’s “Daredevil” was “about as exciting as a warm bowl of flop sweat.”

Most critics agree that Affleck’s “Daredevil” wasn’t particularly memorable and the overall film was mediocre at best. However, Charlie Cox, the actor who plays Daredevil on the highly-acclaimed Netflix TV series, recently revealed he is a huge fan of Affleck’s version of the blind superhero. Cox defended both the movie and Affleck’s performance.

According to Cox, Affleck did a good job in making Daredevil viewable on the big screen for both kids and adults given the superhero’s mature storylines.

“I actually really, really liked the film and thought Ben Affleck did a really good job,” said Cox. “I think that if you make Spider-Man … for example, you can make a movie for kids and adults and it can have that kind of humor because I think it’s true to the characters for the most part. Daredevil needs to be on a platform like Netflix because the source material is so dark and so complicated and so sinister at times.”

Cox went onto document that it’s not easy to make a movie, and asserted that perhaps Marvel was doing superhero things “in a much different way back then.”

Marvel’s entire business model has changed since the days of the 2003 “Daredevil” release. Back then, it had much more freedom in terms of marketing its upcoming superhero flicks.

Before Disney stepped in, Marvel produced material for a more mature demographic in the form of casino games, some of which, like the Daredevil game, can still be seen on the Betfair gaming site. However, when its license expires, the game will be pulled from a slew of high profile gaming portals.

Critics are wary of pinpointing Disney’s acquisition of Marvel as the catalyst for making better box office hits for a wider demographic. While they certainly have bigger production budgets, that hasn’t stopped them releasing the odd flop. “Ghost Rider: Spirit of Vengeance,” for one, was released in 2012 – three years after Marvel was purchased by Disney. The movie received disappointing ratings on top review sites. Rotten Tomatoes only gave the film a rating of 17 percent and this was deemed generous by some film critics.

There haven’t been any discussions on whether there will be a new Daredevil movie in the coming years, but if Marvel’s mass production of superhero films shows anything, don’t be surprised if something gets announced in the near future, with or without Affleck playing the lead character.