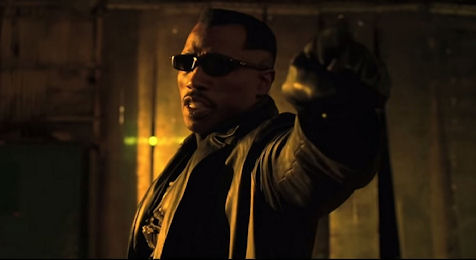 It’s pretty much an accepted fact that the Marvel Cinematic Universe basically prints money. With a whopping 13 wildly successful films under its belt and another nine on the way (that we know of), it’s safe to say that the MCU is one of the most successful film franchises of all time. As Marvel continues to roll out fresh takes on both established and lesser-known characters, many have been hoping that the company would be resurrecting one of the heroes that helped kickoff the superhero movie trend.

Fans of supernatural action-horror have been beside themselves recently with the idea of a crossover movie between “Blade” and Kate Beckinsale’s own lycanthropic action franchise, “Underworld.” Sadly, it doesn’t look as though the crossover, or a new “Blade” movie in general, is meant to be. At least, not any time soon.

We hate to burst everyone’s bubble, but we have some bad news if you were hoping for a revamp of Marvel’s “Blade” franchise. At this year’s New York Comic Con, the head of Marvel Studios, Kevin Feige, said Marvel isn’t planning on making a new Blade movie. However, there’s still a glimmer of hope for daywalker devotees as Marvel has hinted that the company is still likely to take advantage of the character in some capacity in the future.

Blade is something of an unknown quantity for Marvel, which makes the vampire hunter a unique challenge for the MCU. The publisher has been able to succeed with smaller properties like “Guardians of The Galaxy” or previously poorly handled characters such as “Daredevil” and “Punisher,” but rebooting a character that already has a strong, positive identity with fans is a trickier proposition.

The original “Blade” film in 1998 was the first successful superhero film of the modern era and helped to pave the way for Sam Raimi’s “Spider-Man” and Bryan Singer’s “X-Men.” The movie made an impressive $131 million on a budget of around $40 million and spawned two sequels: Guillermo del Toro’s now cult-classic “Blade II” in 2002 and 2004’s “Blade: Trinity.”

All three films were box office successes, though “Trinity” fared significantly worse than its predecessors with critics. The first two movies also had their own successful video games for the PSX and PS2, respectively. The first film remains a popular commodity today, with Blade’s likeness being included among a number of slot reels based on popular Marvel characters, which also include Daredevil, Elektra and more heroes from the comic book universe. The “Blade” game actually remains one of the most popular games available, which speaks volumes to the continued love for the character with today’s audiences.

We can only hope that Marvel means it when they say that they aren’t through with the character yet. Wesley Snipes has said many times that he’d be willing to return to the role, and we’ll keep our fingers crossed that the House of Ideas will eventually return to the character that started it all