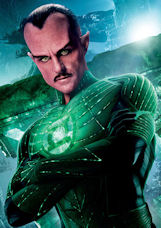 With a little more than a month left until the premiere of the highly-anticipated DC Comics movie “Green Lantern,” we have a new trailer. And after seeing it, I feel like traveling from Sweden (which will have the premiere a bit later than the U.S release) to America to see the movie because I almost can’t wait anymore.

In this trailer, I really love the narration by Tomar Re (voiced by Geoffrey Rush) about the Lantern’s history, OA and Parallex. This is an origin story, so it’s pretty obvious that the film will explore several aspects of the Green Lantern mythology and that should be fascinating.

And remember that extra $9 million dollars Warner Bros. spent on the film’s visual effects? I’m grateful they did it. This movie looks completely epic.

There was one thing that I found especially interesting about the trailer. At the 2:08 mark, there is what appears to be Sinestro being thrown into something familiar that has a touch of the color yellow … Like I said about three weeks ago, I was expecting Sinestro to become evil in the sequel but it looks like we will see a certain yellow bad boy earlier than we thought.

What else is there to say about the awesomeness that is the “Green Lantern” movie? Just that if there is a movie you should see this summer, “Green Lantern” is definitely the one.