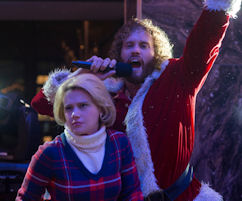 Anybody who has ever had an office job can probably safely say they have fantasized about letting loose and just destroying the office in a drunken rage whilst watching co-workers act like bumbling fools. Perhaps I’m speaking for myself, but it sounds fun in my brain as well as to the writers of “Office Christmas Party.”

The plot is simple enough: an uptight CEO is threatening to shut down her brother’s branch. In order to land a big client and save his branch, he plots to throw an epic Christmas party. As plots tend to go, said Christmas party gets insanely out of control, and there lies the hilarity.

The trailers for “Office Christmas Party” have some very funny moments and my hope is that the funniest bits were not used in the trailers and remain to be seen. From alcohol to stair sledding, the physical comedy is going to be vital in this film, not just the quotable one-liners.

Rated R for crude sexual content, language, drug use and graphic nudity, “Office Christmas Party” has a lot to seemingly offer on the comedy platter.

SNL has many threads woven through the cast, which excites me. Aniston recently made an appearance on the sketch comedy show alongside Bayer, who performed a spot on Rachel from “Friends” impression. It is not surprising to me that Aniston once auditioned for SNL but took a job on a new sitcom in lieu. And McKinnon has consistently garnered praise for her work on SNL.

What all this translates to is that I personally have extremely high expectations for “Office Christmas Party,” which hits theaters tomorrow Dec. 9.