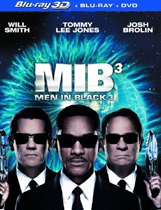 Admit it, “Men In Black 3” was great fun. A definite improvement as far as the sequel is concerned, the third installment brought plenty of laughs, excitement and action. It also managed to touch a few hearts too.

Thankfully, you’ll be able to relive every marvelous moment and purchase your very own copy of “MIB3” when the Blu-ray and DVD hits stores this tomorrow (just in time for the holidays). And, as one would guess, the Blu-ray/DVD combo pack is full of fantastic features. My personal favorites are the “Spot the Alien” game, in which the viewer must spot the difference between aliens and humans, and the interactive Movie Touch app, which unlocks interactive features from the UltraViolet copy.

Free to download from iTunes, the MIB3 Movie Touch app makes it possible for the viewer to become immersed in a plethora of extras. Provided you have an iPad, once you’ve downloaded the film to your UltraViolet collection you’ll have access to filmographies, stills, multi-angle scenes, 360 turnarounds, behind-the-scenes videos, fun facts and more. Plus, while you’re enjoying the film, you can select clips, edit them and share these moments with friends on Facebook and Twitter.

To get a better idea of how cool the MOVIE TOUCH app is, take a gander at the images below:

All the added value on the Blu-ray/DVD Combo Pack, plus …
• The Case of Boris the Animal: The 3D Models of MIB 3
• Converting to 3D featurette

• All three Men in Black films on Blu-ray with UltraViolet (MEN IN BLACK, MEN IN BLACK II and MEN IN BLACK 3) in collectible packaging
• “Worm” bobble head figurine