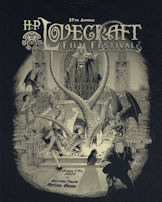 “The only festival that understands.”

Born in 1890 in Providence, Rhode Island, Howard was the only son of a benighted family that seems, after his happy young years, to have suffered one calamity after another. Madness befell both his parents, his wealthy grandfather lost his fortune, and Howard, along with his two aunts, lived on in increasing penury until Howard’s death in 1937.

He made a meager living off his writings, which began as tales of mystery and horror, gradually encompassing science fiction elements as well. Some of these were printed in the pulps of the day: “Weird Tales,” for example. Some of his work was in the form of “ghost writing” for others less gifted, but also working in the genre. And some of his work was never published in his lifetime.

For a person ill-suited to his station in life and the very decades in which he lived, one would think his passing would be little noted and soon forgotten. Not so. Thanks to his legion of friends, many who knew him only through correspondence, his name and works hung on until a time came (the stars were right) when their unique tone could be appreciated. Today, he has a popularity unknown to him during his life.

In 1995, Andrew Migliore – a resident of Portland, Oregon, and a devotee of Lovecraft’s writings – started the festival based on a chance remark from a filmmaker friend. In more recent years, Migliore has assumed an “emeritus” role as the active planning, advertising, and presentation have been assumed by Brian and Gwen Callahan. The Callahans moved to Portland from New Orleans (was there ever a more haunted city in America than French/Creole/Black hurricane-torn New Orleans – the new world home of Louisiana Voodoo, Jazz, and Mardi Gras?). For the last 11 years, they have run the festival, including a highly successful Kickstarter program that pre-sells participation, greatly enhancing guaranteed revenue and thereby a more expansive festival.

Today the “HPLFF,” ensconced in a 1932 movie palace appropriately named the “Hollywood,” still has as its core the presentation of amateur and professional films based on Lovecraft’s writing and the “Mythos” he and his literary friends created. Added to this are panels discussions, 72-hour “under the gun” film productions, art displays and contests, a micro-fiction contest, live presentations, author readings, and the infamous “Mall of Cthulhu” where merchants of the bizarre entice buyers with tastes to match.

This year’s edition was still recovering from the covid pandemic, but nevertheless featured guest Jeffrey Combs (“Re-Animator,” “Bride of Re-Animator,” “Beyond Re-Animator”), eight feature films and 62 short films. There were panel discussions covering such subjects as “Cthuthu in Comics,” “Lovecraft’s Favorite Movies” and more.

This was my 24th or 25th time attending the festival and, as usual, the film offerings varied from excellent to something even American International would be embarrassed to release – but that’s the fun of it! And there is always much more good than bad. Judging from the enthusiasm of the throngs that attended, they would agree with me.