Filming this documentary was as dangerous as being a subject in what was being filmed. Bullets had to be dodged and raw footage had to be periodically smuggled back to the US. Just to be named in the credits earns exile if not prison and brutal retaliation.

This is the story about an unconfirmed election, a president who refused to leave office, and a population in revolt. Within days of its opening, footage was still being added in time for its premiere at DocNYC on Nov. 11.

Once considered a legitimate, democratic president, Nicolas Maduro is now considered a totalitarian dictator. Initially, he was popular and the hand-picked successor of Hugo Chavez, the beloved Venezuelan president who died of cancer at the end of 2012. Vice President Nicolas Maduro won in an election a month later. But soon, left with an economy already in trouble, Maduro found he had no idea how to rule or what policies to implement to save Venezuela from bankruptcy, chaos and literal starvation.

He declared himself president after a contested 2019 election where his opponent, Juan Guaido, also declared victory. Chaos, already a Venezuelan staple, has reigned supreme ever since. Maduro prohibits his opposition from running for office and has imposed torture and prison sentences on anyone who tries.

Waiting in the wings is Leopoldo López, a handsome, charismatic Harvard-educated man with a smart, gorgeous, social activist wife, Lilian Tintori. Repeatedly jailed for being mayor of a Venezuelan city and criticizing Maduro, the people cheer López on to run for president. This popularity only escalates Maduro’s retaliatory anger and López’s increasing danger.

Written in a statement before the US election, co-director Maxx Caicedo writes, “With the rise of autocracy around the world and America’s leadership in crisis, the central questions of our documentary could not be more urgent. How does dictatorship come to replace democracy? When democracy is threatened, what recourse do individual citizens have?”

“A La Calle” is the story of a brewing insurgency as a once-trusted leader transitions into a ruthless, totalitarian dictator. It is instructive and a forewarning as a resource-rich country needlessly becomes a failed state. Watch and learn. 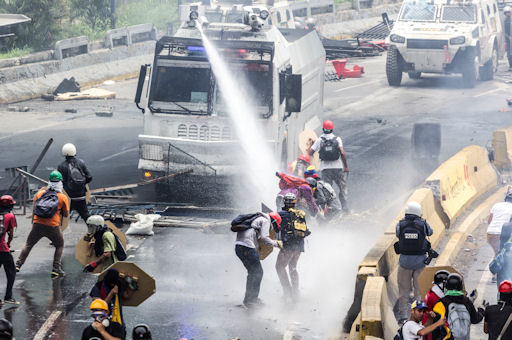