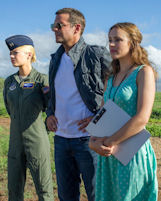 “Aloha” — Cameron Crowe’s first feature in four years — kicks off the spring movie season in style. Bradley Cooper, playing ne’er-do-well Brian Gilcrest, combines his “American Sniper” elite military role with his government dark ops hustler role in “American Hustle” and the results are amazing. Thanks to his military bearing, there is not a lot of acting required, just a uniformly tough guy outlook hiding a mortally injured soul. But that will soon come to a screeching halt.

Crowe’s screenplay starts off to be a mystery spy thriller and evolves into a romantic comedy. The good news is that it never loses track of the message. Is the privatization of space exploration a good idea? Conveying this message with the lightness of a rom-com takes a good deal of juggling, and Crowe is up to the challenge in both the directing and screenwriting departments.

As the mystery thriller melds with the romantic failures and eventual redemption of Gilchrest, the movie becomes a parade of famous names and beautiful people. Too beautiful for some, no doubt, but the performances and casting are so perfect that all is forgiven. A lumpy ending is smoothed over by Emma Stone in the character of Air Force fighter pilot Allison Ng, dispatched to babysit loose cannon Gilcrest. The film time is almost equal parts Cooper and Stone, but by the end of the film Stone steals the show.

Captain Ng is one quarter Hawaiian, although you would never guess it looking at her stark blond features. Her initial appearance as the hyper bright-eyed and bushy-tailed star pilot contrasts nicely with the world weary, battle wounded and morally bankrupt Gilcrest, who is just coming off a nearly fatal battle injury and a failed weapons scam in Afghanistan. He re-unites with billionaire Carson Welch (a perfectly cast Bill Murray), who is intent on dominating space with his own line of self-financed satellites.

This would be about as funny as a heart attack if not for Murray and a similarly jocular, if small, role by Alec Balwin as General Dixon. We weep for more of this pair but, of course, we do not get that. No matter, what little screen time they have is so perfectly, reliably and hilariously delivered we can make do.

The fun sound track (“Everybody Wants to Rule the World”) combined with a suitably cheeky treatment of native Hawaiian music and mysticism rounds out the package of international intrigue, world record poppy dialogue and, yes, beautiful people. Rachel McAdams does yeoman-like work playing Gilcrest’s ex-wife, Tracy. By the end of the film, we have seen enough glamor close-ups of Stone and McAdams to last a lifetime.

Crowe’s screenplay saves the day. This is one of the best films so far this year, but Oscar nominations will be a stretch.