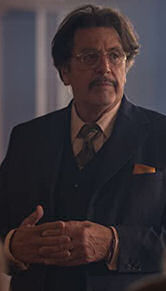 This is an untidy 109-minute film dramatizing the true story of Mildred Gillars (Meadow Williams), an American entertainer who, during WWII, performed in a series of Nazi propaganda radio broadcasts intended to dissuade American participation in the war against Germany.

The film opens with the arrest of Gillars in Berlin, where she’s been living incognito since the collapse of the Nazi regime. She is flown to Washington, D.C., to stand trial for treason, a capital crime. The director, Michael Polish (“Twin Falls Idaho,” “Norfolk,” “The Astronaut Farmer,” “Big Sur”), intersperses stock photography and period newsreel footage in an effective way of setting the scenes.

Once in Washington, Gillars meets her lawyer, James Laughlin (Al Pacino), a prominent defender of unpopular cases. Distant, mutual dislike is immediately apparent between the two, and Laughlin avoids answering Gillars’ principal question: who is paying him to defend her? This remains an issue throughout the film.

An interesting, and also unexplained counterpoint, exists between the two principals: Laughlin has unkempt hair while Gillars is beautifully coiffed; he is sallow and sagging whereas she has perfect makeup; his three-piece suit looks like he’s slept in it all week while she has a stylish wardrobe handsomely worn. Yet he is the free defender and she the caged defendant. Is he genuine, while she is the creature of artifice?

At the first court appearance, Pacino continues his strangely low key, mildly sarcastic, disheveled, world weary performance as Laughlin. In walks the defendant, looking and moving like a movie star – again the polar opposite of her defense attorney. The prosecutor, John Kelly (Mitch Pileggi), presents a more typical, higher energy persona, obviously contemptuous of both Gillars and Laughlin. The imbalance between the two emotive styles, especially considering Pacino’s long acting career as a high energy scene stealer, is confusing. It appears that his heart is not in it, both as character and actor.

The film continues in this vein, with trial information being presented in the present tense, either following or preceding Gillars’ memories of the situations. This juxtaposition is somewhat confusing at first in that, unlike the black and white archival footage, this is presented by jump cut and uses the same film techniques as the present-day material. Eventually, one becomes used to it.

Through this method we are introduced to Gillars’ lover, Max Koischwitz (Carsten Norgaard), her radio producer and writer, who is devoted both to her and the Nazi cause. Also presented is Dr. Josef Goebbels (Thomas Kretschmann), Nazi Minister of Propaganda. Kretschmann, something of a cinematic “Nazi for hire,” provides an understated performance while still managing to evoke terrifying intelligence, ruthless fanaticism, and the threat of physical violence. The latter becomes all too real in a rape scene in the Berlin radio studio, and later in his lavish hotel room.

The most remarkable performance in these flashbacks is that of Williams, as she portrays Gillars’ wholehearted immersion in the parts she was given: propaganda broadcast to the US mainland and to American troops. These portrayals, despite the clear threats made by Goebbels, cast doubt on Gillars’ later defense of being nothing more than another helpless Nazi victim. She enjoyed the performances and the adulation that went with them too much.

Pacino’s character finally comes alive in the concluding scenes of the trial, when he presents his summation to the jury. There is some of his youthful fire in the 80-year-old actor’s portrayal as he attempts to shift the focus of the trial from Gillars’ involuntary broadcasts to American society’s need for vengeance.

Following an overly dramatic reading of the jury’s verdicts, which I will leave to the reader’s imagination, the film’s last scene takes place in Laughlin’s cavernous, almost empty office as two mysterious men question the job the lawyer did. He responds that he gave them what they wanted – a good show. Who are these men? Government agents? Emissaries of escaped Nazis seeking to obscure history? They are never clearly defined. Nevertheless, they hand him his next case, the defense of another accused traitor.

As I said at the beginning, this is an untidy film. However, it is well paced, running faster than its hour and 49 minutes. The viewer is left unsure of the justice of the verdict, the commitment of the defender, and motives of the forces behind the defense. In the dramatization of a true story, such lack of clarification is probably better than worse.

The performances were good, although Pacino, as stated before, lacked his customary fire, even when the story called for it. Was that in deference to the personality of the historic James Laughlin? Williams’ smoldering performance as the early ‘40s Berlin Gillars was impressive, as was that of Kretschmann, coming off his 2020 portrayal as another ruthless Nazi in the TV series “Penny Dreadful – Los Angeles.” The rest were two-dimensional props to further the story. This was particularly unfortunate in the cases of Gillars’ Berlin lover Koischwitz, whose character was not delineated as it could have been, thus shedding more light on Gillars’ motives.