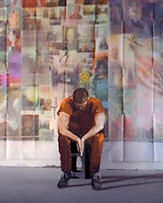 After seeing this film I immediately contacted a life-long friend in the art biz. You’ve got to do a show on prison art! Include work not just by those incarcerated, but also by ex-cons who are desperately trying to survive on the outside. Because they usually don’t have access to supplies in prison and because they have lost their freedom, these guys use surprising materials with intense emotion.

One of those incarcerated guys was Jesse Krimes. At 26 years of age and in solitary without art supplies he learned that with just hair gel, newspaper and soap, he could still create. He expands to incorporating a deck of cards into his creations. Once out of solitary he advances to bed sheets. He smuggles out each sheet segment, used as a canvas, bit by bit, intending that they eventually all fit together to make a 40-foot mural. He has said: “It was my attempt to transfer [outside] reality into prison and then later became my escape when I sent a piece home with the hopes that it could be my voice on the outside in the event that anything bad ever happened and I never made it home.”

After release from six years in a federal prison, Krimes sees his sheets put together in his first art show.

“Art & Krimes by Krimes” is the story of Jesse Krimes. It begins with his birth to a young 16-year-old. By the time he has a full scholarship to Temple University, he is reckless and in trouble. A second arrest lands him in prison for six years for dealing cocaine and not revealing his source. His first year is in solitary where he has the option of losing his mind or finding something to do.

The filmmaker, Alysa Nahmias, lets Krimes narrate his story as she films. She explains in her director’s notes: “In 2014, I came across a profile of artist Jesse Krimes, including photographs of the 40-foot mural he created while in federal prison from 2010 to 2013, using bed sheets, hair gel, and newspaper. His mural was a collision of anguish and beauty, and an emblem of its creator’s resilience and humanity. It captured something quintessential about why we make art, and why we need it.”

Nahmias, who holds degrees from The Gallatin School of Individualized Study at New York University and Princeton University, began her career making films on the National Art Schools of Cuba and art, music, and censorship in contemporary South Africa. She is a co-founder of FWD-Doc, a non-profit organization which supports disabled filmmakers and entertainment industry workers. Her film on Krimes and his art is deep, knowledgeable, and insightful.

What intrigued me the most is how Krimes’ art has changed through time. He tries to purchase as few materials as possible, preferring to use what he has and make it stretch. There are many days when he still feels depressed. Money is a big problem. His prison record stops him from getting a lot of jobs. But he has expanded his production by learning how to work with glass. His most recent show, “Strange Roots,” featured beautifully delicate trees, branches and roots, created with digitally-printed plastic substrates, botanicals and other natural materials intermixed with his own exquisitely hand-blown glass.

Jesse Krimes’ remarkable story will hopefully be nominated for an Academy Award for best documentary. It is that well done and it is that important. MTV Documentary Films released it in theaters in New York and Los Angeles on Sept. 30. 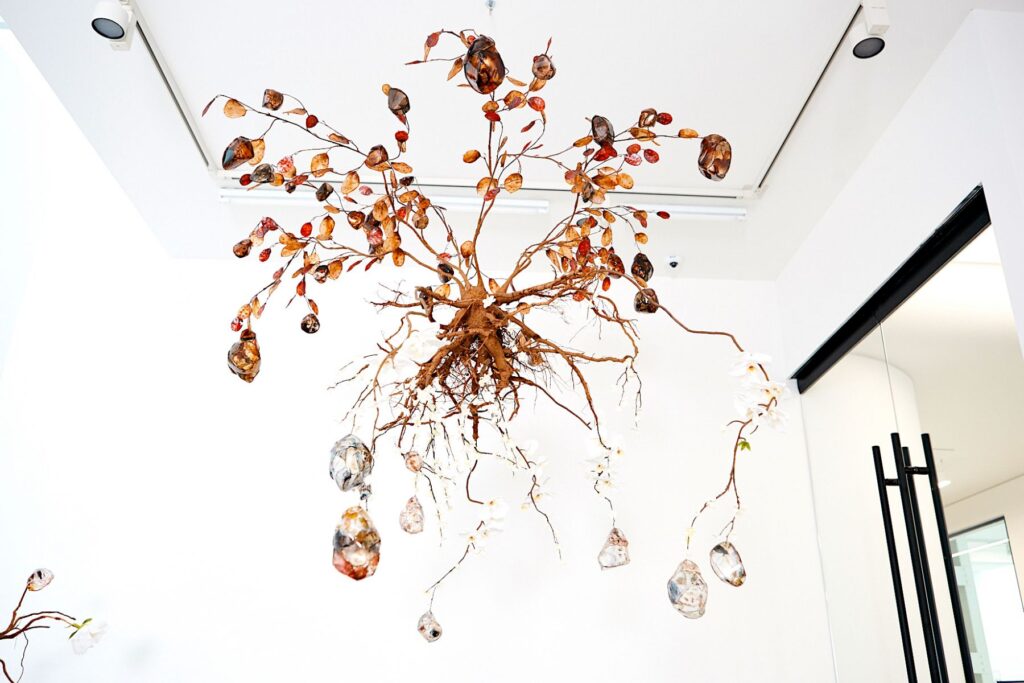