Well, I’m going to tell you one thing — Richard Kind, the star of “Auggie,” is going to be teased unmercifully about his role in this film. What will his good friend (and best man at his wedding), George Clooney, have to say about it? 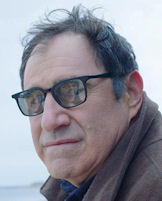 In “Auggie,” the newly-retired Felix (Kind) laments, “No one needs me. I’m nothing. I used to have value and purpose. Now, I don’t know what to do with myself.” While in this maudlin despair, his loving wife gets a job promotion. This is the normal part. But what comes next is hard to take.

Belatedly opening his retirement gift, Felix gets a pair of glasses instead of a gold retirement watch. Disgruntled, he puts them on and a beautiful girl (apparition) in her 20s appears. She explains that the glasses read his subconscious brain signals and that she knows almost everything about him.

Felix has a great marriage with an attractive wife. They regularly exchange I-love-you’s throughout the day. Their large home has character and charm. But without a job, what is there for Felix to do?

Boredom is the root of all evil and the midwife of trouble. Felix soon learns that he can buy a companion product to go with the glasses. This is where “Auggie” just becomes too odd and uncomfortable for me and where Clooney is going to raise one of his is-this-appropriate? eyebrows.

Felix not only can see and speak with his apparition, but now with his additional product he can touch her.

How Felix deals with his cravings for the apparition and how this affects his real world is an existential study in what happiness really is – a play on his “happy” name. Whether someone joins an online game community or becomes involved in online romances, the lonely, bored and under-challenged have a choice to make every day: to engage in real life or dip into a voyeuristic facsimile.

“Auggie” was written and directed by 28-year-old actor/director Matt Kane. He had a great cast to work with, but to see Richard Kind writhing on the living room floor with an imaginary love interest was just too much.