As the chicken embryo consumes the food inside the egg, so do we consume the world’s resources. Consumption threatens to become more than a means to an end. It threatens to become an end unto itself. The beautiful things in this movie are not the priceless things we live for, but they threaten to displace those priceless things. The beautiful things are the trinkets with which western civilization bought the New World. 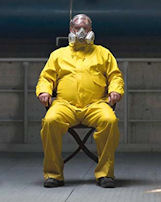 Written and directed by Giorgio Ferrero (co-directed by Federico Biasin), the film is presented by The Film Society of Lincoln Center and Istituto Luce Cinecittà as part of the 18th edition of Open Roads: New Italian Cinema in New York City.

The movie is in four parts: Petroleum, Cargo, Measure and Ashes. The characters are Petroleum Man, Cargo Man, Measure Man and Ashes Man. The video images of the four men (and a pair of fantastical dancers at the end) take us on a tour of the material world. Entertaining enough, they are overwhelmed by the outstanding soundtrack. The images, at times, becoming an excuse for the audio. As the spoken words are in danger of falling over the message, there is a weighing of the existential tension between the body and the soul.

Toys feature heavily. Toys knocked together from the detritus of failed human relationships, toys made to destroyed. Material parts of human existence are made to be destroyed.

“Everything begins with oil,” says Petroleum Man, isolated in the middle of Texas oil country. Well, OK, not everything; but let’s go with the flow. The earth gave us oil after millions of years of gestation. We have a responsibility to think about what we do with it. Petro man had a lousy childhood. His father a neglectful oil worker, his only toys were parts of a drilling platform.

Cargo Man does not fare much better. An officer on a cargo ship, isolated from his family, he roams the sea and takes his comfort where he can from sex workers. Measure Man lives most of his life in an anechoic chamber, a noiseless room where things are tested for their sound qualities. “The anechoic chamber was once used for torture,” he tells us. We take his word for it.

Finally, Ashes Man. He must feed the furnace every fifteen minutes or the alarm will sound. When his part comes (at the end of the film, of course) he dresses full time in goggles and gas mask. The transformation of the natural human to the surviving human waste robot is complete.

Nods to the environmental paean “Koyaanisqatsi” (Godfrey Reggio director, music by Philip Glass), the soundtrack by writer/director Ferrero and Rodolfo Mongitore is marvelous. A riveting combination of new age and techno percussion that morphs to a driving, brilliantly brainless, disco beat in the shopping mall in the closing scenes. Beginning misery, middle misery, ending misery and final misery, followed by let’s-have-a-party.

Electro-mechanical alarms versus the Earth’s alarms. Shredder alarms, furnace alarms, poison gas alarms, movement alarms, timeout alarms. Climate change, pollution, hurricanes, blizzards, extinction. So many alarms they cease to have a meaning. Dance at the mall instead. The swimming pools fill with discarded things but the pool at the mall is still clean. When there are no humans left, will there still be beautiful things?