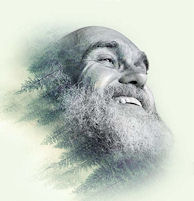 Through 1968-71, while the US was blasting up Vietnam, I was searching for the ideal country and the perfect place to live. I learned different languages and attended foreign schools. I joined the many young people who were searching for something better. Inevitably we couldn’t find peace and justice in our physical world, so many of us turned to the spiritual.

The Beatles received their mantras from Maharishi Mahesh Yogi in 1968, George Harrison became a Hindu in 1969 and released “My Sweet Lord” in 1970. Ram Dass published his book, “Be Here Now,” on spirituality, meditation and yoga, in 1971. What we couldn’t find in the world we tried to find in the spirit.

“Becoming Nobody” is the most recent documentary on the life of Ram Dass. If you have heard of Timothy Leary, it is likely you have heard of Ram Dass/Richard Alpert. Together, at the apex of their careers teaching clinical psychology at Harvard in 1963, Leary and Alpert shockingly prescribed LSD to their students. Fired, they took different paths. Leary ended up in 36 different jails related to drug use, and Alpert/Dass ended up in a search for enlightenment.

“I tried every chemical possibility, fasting, praying, reading, meditating. I still came down after hundreds of explorations. Then I went to India and met my guru, Maharajji, who didn’t come down.” It is from Maharajji that Ram Dass received his name, meaning servant of God, and transformed his life into a new focus based on living in the moment. His 1971 book, “Be Here Now,” is still in print and has sold over two million copies.

Where is Ram Dass now?

This inspiring film by Jamie Catto takes four basic precepts that Ram Dass has taught through time and produced an anthology of Dass’s spiritual thought. Ironically, being that he was famous for being a supremely gifted speaker who had mastered the analogy, metaphor and humor to enthrall his audiences, Ram Dass now is expressively challenged.

In 1997, at age 65, he had a massive stroke that left him not only paralyzed on the right side but with expressive aphasia. This condition does not weaken the thinking process, but it does affect speaking. Through the help of Jamie Catto’s interviewing process, using a few insightful sentences of response and clips from past speaking events, this rendition of Ram Dass at age 88 is especially powerful as he reflects on end-of-life thoughts.

Walking each other home

“I always talk about myself – it turns out – but those of you who know, it isn’t really me; it’s us. I just use myself as a case study that I know better than I know everybody else’s case study. Because what awes me, is how parallel our journeys are.”
In his transition to life in a wheelchair, Ram Dass and Catto present four key themes to discuss and clarify. The most meaningful film chapter for me was Ram Dass’s quote: “We’re all just walking each other home.”

Ram Dass explains, “If there is one addiction that outlasts all the others it is the addiction to be free.” So he asked his guru, Marahajji, “How do I get free?” His guru answered, “Feed people.” A little frustrated, Ram Dass asked his question in a different way. “How do you get enlightened?” The guru responded, “Serve people.”

On death and dying

The last film chapter relates to the title of the film: “The game is not about becoming somebody, it’s about becoming nobody.” Ram Dass explains revelations he has on death and dying. At 88 years old, he remains a master of thought.

“Becoming Nobody” will open at the Rubin Museum in New York and the Laemmle Royal in Los Angeles, as well as theaters in the Bay Area, on Sept. 6. A national release will follow.