Every soul is a fish on a journey through the sea and the setting is water for much if this riveting film. The movie is animated but the story line is so complex and has so many symbolic references that it is most suitable for adults. The magic is in the combination of mythical symbols that make up the settings and characters. Yet the Mandarin version with English subtitles flows so smoothly across so many cultural legends that one hardly knows it is not in English. 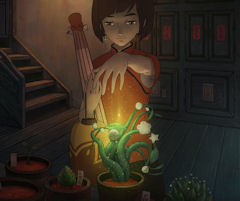 This flow and power comes from a combination of a tight screenplay and world class technical animation. As in “anime” the visual emphasis is on the artistic interpretation of environments. The characters are conventional plot figures, but there is no acting in the traditional sense of the word. As in traditional masked dramas, it is the symbolic representations of the characters that count, not their physical mannerisms.

The children’s native world is the spiritual plane where the community uses supernatural powers to make and control the elements of physical earth. When children turn sixteen they are allowed to go into the earthly world to see their parents’ handiwork, nature, at work. Chun’s parents are worried. They warn her, “Earth is a dangerous place.” She learns why when she is transformed into a dolphin. Netted and on her way to the slaughterhouse, a young diver rescues her and then dies when he is drawn into the interdimensional whirlpool vortex.

This sets the stage for the film’s centerpiece, the battle between spirituality and carnality. The killing of the dolphins is original sin, a travesty to be fought by enlightened spirits. Chun is the warrior, but young and naïve, she is not aware of the cost of her undertaking. Her lover Qiu will have to make the ultimate sacrifice.

First, Chun must first journey into the land of the dead and violate the fundamental laws of the universe. Like time travel, her travel across dimensions is forbidden to interfere with worldly life. She must choose between her loyalty to the human who gave his life for her and her family and loved ones at home. She walks a tightrope between mortal sin and sainthood. Elders, in a bizarre variety of face and form, hold the keys to the power of life and death and are self-described “businessmen.” The fish are the souls on a journey and the businessmen make deals regarding those souls.

The cautionary storyline is told with an action-packed string of intense and large scale environmental upheavals, interspersed with beautiful metaphors such as swimming in the rain and fish that become birds. Yin/yang is everywhere, representing balance and tension and conflict at the same time. Underlying the movement is the tension between spirituality and carnal pleasure.

Filmmakers Xuan Liang and Chun Zhang spent 12 years working on “Big Fish and Begonia,” which grew out of a 2004 seven-minute short. Liang completed the script in 2009 but was forced to put it aside to wait for funding. This is a moving work of art anchoring incredible animation with a solid screenplay. It will be one of the best this year.