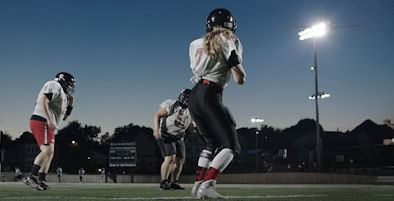 My two heroes for the week are Allison Cahill and Chanté Bonds. They are famous for being the very best at what they do. They have guts, courage, strength and, most of all, drive. They have identified what they wanted to achieve and have let nothing stop them. They are two of the world’s best football players in the Women’s Football Alliance (WFA).

“Born to Play” documents the 2018 football season of the Boston Renegades. Various game clips showcase tricky plays and brilliant athleticism. The women, only able to afford four hours of field time a week for practice, are fully committed. Allison Cahill, working as an athletic trainer, gets to keep in shape where she works. Chanté Bonds, teaching math in a classroom and serving as an admissions coordinator, has more distractions and challenges.

Then there were her four years playing basketball and softball in high school and four years at Princeton starring as a basketball player while earning a degree in history. Now in her early 40s, she is gearing up physically for a career without a foreseeable end.

Bonds also became a high-achieving basketball player in both high school and college. But her true calling is football. Bonds — who plays cornerback, safety, wide receiver and running back and also returns kicks — was named the 2018 WFA Most Valuable Player.

What grabbed me about Cahill and Bonds, both on the Boston Renegades, was their intense allegiance to their team. The camaraderie, the teamwork, the collective suffering and the economic struggle tighten a bond between women who know they are breaking barriers.

Women players are not subsidized. As a matter of fact, they have to pay to play. They all have jobs where their time and energy have to go towards a paycheck. While they are behind male athletes in money, Cahill and Bonds still represent the epitome of pure athleticism — playing for the sheer joy of the physical challenge and the emotional union of humans working towards a common goal.

“Born to Play” is Viridiana Lieberman’s feature-length documentary directorial debut. A die-hard sports fan and author of the respected book “Sports Heroines on Film: A Critical Study of Cinematic Women Athletes, Coaches and Owners,” Lieberman controls her story in the editing process. She not only builds suspense in the lead-up to each game, but she also promotes respect, support and interest in the phenomenal world of women football players.

“Born to Play” premiered on ESPN on July 1. It is available now on the ESPN+ app for streaming. Up-coming ESPN scheduling will be announced.