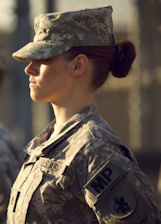 Peter Sattler’s directorial debut is as bare and exposed as a prisoner in a cell. A stripped down film about warehousing human beings and waiting for the next step. The next step for the inmate is release, and it may come sooner than the next step for the jailer. In the meantime, the guards become the guarded and sometimes the prisoners have more freedom. At least, so it seems.

Kristen Stewart plays PFC Amy Cole, a desperate 20-something who joined the Army to escape the slow death by suffocation of small town life. She also joined with the vague intent of making a difference. Sent to Guantanamo. she finds herself guarding charismatic detainee Ali Amir (Peyman Moaadi).

As Cole pulls away from her fellow soldiers, it seems she has something in common with him. Each one wants to make a difference and each one lives in a prison. Cole’s prison is in her mind. Ali’s prison is the bars of Guantanamo and the memory of being caught with a bag of cell phones at the wrong place and the wrong time.

The presentation of this film is as stark as an experimental stage play. The hard, smooth and flawless surfaces of the military prison are an ever present background for an examination of the mental states of the guards and the guarded. The stark surroundings seem to pull in on the characters as they spend twenty four hours a day watching the detainees.

Corporal Ransdell tells them on their first day that the men in their care are called detainees, not prisoners (they have numbers, not names). He adds, by way of a job description, “You are not here to keep the detainees from escaping. The walls do that. You are here to keep the prisoners from killing themselves.”

Indeed. But who keeps the guards from killing themselves?

Cole reports to Ransdell, well played by Lane Garrison. In fact, all of the major roles in this film are played with depth and feeling. The cinematography is up close and personal, with long slow shots of the players’ faces. The extreme plainness of the surroundings leaves us no choice but to peer into the minds of the soldiers, as they spend their time peering into the cells of the detained.

Ransdell is the most typical soldier in the film. He takes his breaks as they come, good and bad, and never volunteers for anything. He is willing to engage in intimate personal relationships as part and parcel of serving Uncle Sam but he is short on understanding when confronted with the true task of leadership. 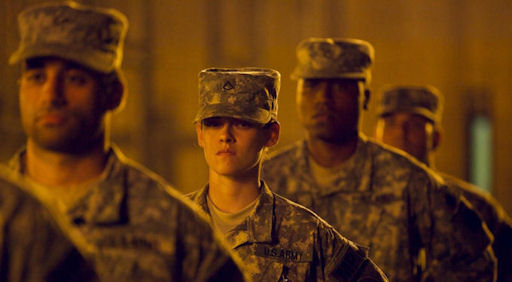 Rico (Joseph Julian Soria) is Cole’s best friend. As such he is the sounding board for what she feels and a reporter for what the average recruit might feel. They talk over meals as Cole stirs her food around, barely even sensing it as something to be consumed. The food, water, sounds and lights never change. It is perpetual day and it is perpetual night.

Detainee 471 (Ali) was yanked out of his home and woke up in Gitmo. Cole ejected from her small town and ended up in the same place. As the days go on, each feels more and more alone. Eventually, they begin to bond.

This is not a political film. It is not an examination of the correctness of a prison camp, or the way prisoners are treated. Nor is it about a woman’s life in the military, sexual harassment, glass ceilings and the rest. It is a film about human emotions. Specifically, the ability to bond, denying our own freedom to act and what we give up when we deny freedom to others.

In the beginning there are overtones of sexual harassment as Cole goes through her first days in the camp. But as time goes on it becomes clear that she is her own worst enemy. Her inability to let down her defenses is her best protection and her worst nightmare at the same time. As others around her break the rules and seem to be making lives for themselves, Cole finds herself in grave danger of blurring the line between the caged and the cage-makers.

Great supporting work by John Carroll Lynch as Col. James Drummond, who dutifully carries on despite his stated desire to die in action rather than being where he is. The cinematography by James Laxton is fantastic; he manages to create a wonderful noir atmosphere, even under blinding light. 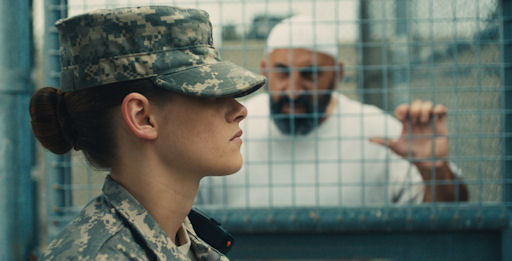