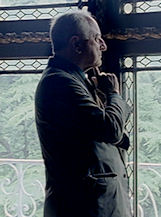 What is there to hide? Banned for 18 years, “Celebration,” an introspective on Yves Saint Laurent as a dress designer, has finally been released for all to view. Opening for a limited US run last October (2019), “Celebration” is streaming online this April. While the somewhat silent film itself does not indulge the viewer in who commissioned the film or why it ended up forbidden, I have done my homework.

In the Beginning
Pierre Bergé was 32 and Yves Saint-Laurent was 26 when they collaborated in opening the high couture house of Yves Saint-Laurent YSL in Paris in 1961. Though it’s thought their romantic partnership ended in 1976, they married two weeks before Saint Laurent died of brain cancer in 2008.

In 1998, writer/director Olivier Meyrou was commissioned by Bergé to create this introspective film of Laurent and his work. For three years, he captured candid moments as well as historic occasions related to the closing of the last Couture House with a living original couture.

The Film is Frank
Meyrou has said that “Saint Laurent was a mythical figure and I wanted to show the flesh and bone behind the genius.” Though Laurent only spoke to Meyrou three times during the 3 years of shooting, Meyrou presents a fascinating study of him through capturing his well-coifed hair but unsmiling, listless, spastic-like shoulders and protruding upper lip. He is a silent subject who appears lost in thought with a drooping head and pencil resting unenthusiastically in his hand.

The film documents accolades to Laurent. Sinuous models saunter through in stylish, elegant clothing or outrageous, impractical, comedic, bizarre outfits. Laurent barely holds his head up, letting it fall to the side as if his neck has lost its muscle, as the seductive models pass by for an inspection of his creations.

At an elegant meal for several, Bergé toasts Laurent, saying candidly, “For 40 years, you’ve done this work which has given you so much joy but, in a way, destroyed many things in you. It has turned you into a recluse. It has made you renounce so many joys. Creation has a price and sometimes that price is high. It’s the route you chose. You chose it as a child, when you were young. You didn’t know it was such a difficult route.”

“Celebration” recalls Laurent groundbreaking pantsuit for women and replications for the average woman to purchase. He was also the first to hire models of different ethnicities. But the shell he becomes, perhaps due to his history with drugs, emotional issues and alcoholism, is also revealed.

Assessment
The “music” for the film is frankly experimental and irritating, sometimes mimicking a whispering group and at other times streaming staccato bangs on undetermined objects. There are hardly any words from or about Laurent. The camera basically records tailors frantically working to perfect the visions of a reclusive dress designer and emaciated, expressionless models parading that vision to the maker. The caveat is that “Celebration” offers a glimpse of the history, evolution, and mystique of Parisian haute couture.

Why Was “Celebration” Banned?
The film does not divulge this, but Daisy Woodward, in AnOthermag.com, a website for women’s and men’s fashion, art, and culture, exposes the truth (31 Oct. 2019). She reveals that after completing the three-year film project, the controlling Bergé refused to see the film and sued writer/director Meyrou’s over the right to distribute it because he had not been allowed to “be part of the editing or narration process.” 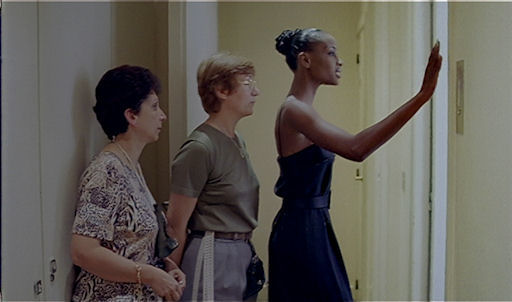