Sir Lancelot Ingram is a magnificently strong, handsome, quiet ex-con. He served eight years. Now, he is out, living in a half-way house back in the same Harlem hood that brought him to trouble. But this time, the bad guys are younger, operating the streets without rules or regulations, and a badge of bravery is being disrespectful to the past leader. 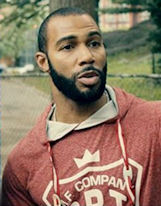 In Attica, Lance had computer training, but the only job he can get on the outside, through his halfway house program, is delivering food to poor people. A silver lining is that one of his clients becomes his closest friend, and, by the way, needs computer help.

What is admirable is the support Lance gets post-incarceration. He’s got a place to live, he’s got a job and he’s been given structure. But what is deplorable is that the same people in these support roles don’t show respect. The white half-way house fellow calls him the N-word and his work supervisor extorts special sexual attention. So while there is support on the outside, he has to earn their respect on the inside.

Chapter and Verse could have sympathized with the oppression of society and capitalized on police harassment and violence. However, the film instead illuminates the other side of the story. It shows Harlem gangs manipulating the system and ruling the hood with amoral authority. They shout out police abuse when there is no such thing and they perpetrate crimes on the most vulnerable of their neighbors.

Chapter and Verse will grip the audience because Lance and his sweet older friend Maddy are honest, great actors. Daniel Beaty, playing Lance, is an award-winning singer, actor, writer, composer and Yale graduate. He teams with Loretta Divine, as Maddy, an actress since 1978 and an Emmy award winner for her role in “Grey’s Anatomy.” The depiction of their trusting friendship is juxtaposed against the treacherous streets of Lance’s old hood and the dangers Maddy’s grandson must navigate – just like the once young Lance.

Slipping into the role as a friend from the past, Omari Hardwick is an actor who is able to reach great heights. His charm and charisma, as a friend and as a womanizer, are undeniable.

“Chapter and Verse” is said to reflect upon what it means to forge your own destiny in an outwardly harsh society. I will add that it also examines the role of integrity and individual decisions when they conflict with the law. Just like Sir Lancelot of the King Arthur legend, Lance is conflicted and challenged – though his physical and moral strength make him a formidable foe.

Masterfully created and brought to full life by an outstanding cast, this is another important film brought to audiences by the 2016 Human Rights Watch Film Festival.

The HRWFF features films that educate us, the first step in activism. Sometimes the films show us solutions to great problems of injustice, but more often they show us the truth without tidy answers on how things can be fixed.