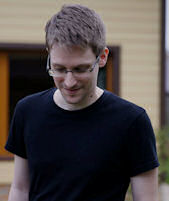 Almost a year and a half after filmmaker Laura Poitras’ and journalist Glenn Greenwald first met with whistle-blower Edward Snowden, his name has become a household word.

Snowden contacted Poitras and asked her to be a part of that historic meeting from the first day that he began telling his incredible story to Greenwald. “Citizenfour” is the result of that original first week of interviews and the firestorm of controversy that began soon afterwards.

As a highly-skilled computer systems contractor working for the NSA, Snowden had the most powerful security clearance the agency could grant. As the reality of what the NSA was doing slowly but surely made it impossible for him to continue his work, he knew that he would blow the whistle on the agency. His testimony in this film, during that first week and afterwards, depicts him to be an honest, straightforward man of convictions. Of course, this is a film made on Snowden’s terms and the dark sides of what he did, or his possible ulterior motives, are not on the radar.

There are very few documentaries that hold the viewer transfixed. Most of them are like an enjoyable read of the Encyclopedia Britannica. This documentary is more like one of Graham Green’s best novels. It is saturated with inside information on the most sophisticated encryption techniques, spy craft and, of course, the center of Snowden’s revelations, the US federal government’s use of massive personal meta-data collection and data-linking. This is where William Binney comes in.

A former NSA analyst at the time of the leaks, Binney resigned in 2001 in protest over unchecked automated meta-data collection and linking. In fact, he pioneered the technique in his early days at NSA, then, apparently, saw it being misused to an extent that he could not tolerate. The idea is that instead of investigating only those who have created probable cause, the NSA, CIA and others, including international partners around the world, created a data base of everybody. Then, when they feel like it, they look for patterns that constitute probable cause. The data included cell phone calls made and received, locations, credit card charges, automated transit card charges, websites visited, e-mails made and received, and more. In this way, a very complete picture if a person could be generated, retroactively. Binney explains this in very scary detail. The truth is stranger than fiction.

Immediately prior to the first meeting, Snowden took a week off from his job so that he would have a plausible excuse for a head start into hiding. He prepared well for the onslaught that he suspected would ensue. The film goes through the first week day by day. On Monday and Tuesday, he began telling his remarkable story to Greenwald, with Poitras’ camera running. On Wednesday, the first story broke in Greenwald’s Guardian. On Thursday the second story came out in the Washington Post. By the end of the week, his significant other was being questioned by NSA, the street in front of his house was full of construction vehicles, his automatic rent payments had been stopped and his landlord was evicting him.

Archival footage of top NSA officials lying to congress is interspersed with Snowden’s revelations. He had hit a nerve.

Through all this we are in the Hong Kong hotel room with Snowden while he is unplugging the phone, which he knows can easily be programmed into a “live microphone” mode. A few weeks later, he is meeting with Greenwald and conversing in written notes which are ripped into tiny pieces as each is read. A complete record is kept on a memory chip by Greenwald.

A short time later, under pressure by the US government, Poitras films the drilling, grinding and crushing that happens to a chip with the wrong information on it. The chip and most of the computer it was in are converted into plastic/metallic particles about the size of grains of sand. Reading this in a spy novel is one thing, seeing it first hand in a documentary is something else.

A week from the first meeting, about halfway through the film, Snowden goes public and reveals his identity. This is the part of the documentary where he is most expressive about his motives. He knows that when his identity is revealed he will be an instant target and that returning to the USA as a free man will be impossible. But he also feels that he must make a stand, even if it is the stand of a martyr, so that others will know to follow his example if they so choose. He refuses to “skulk and hide.”

Of course, he probably knew that his identity would be known soon enough, anyway, since he was obviously permanently AWOL, and was one of a very select group to have access to the leaked information.

Surveillance is control. See this film and ask yourself how close we really are to Orwell’s “1984.” 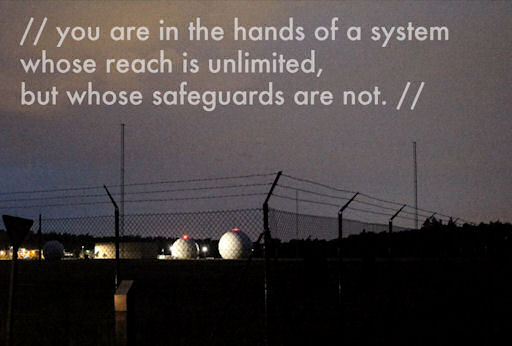