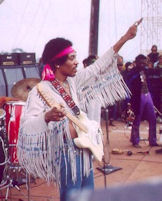 The secrets behind the production of the 1969 three-day Woodstock music festival are spilled. How close and in how many ways the event skimmed catastrophe is documented in “Creating Woodstock,” a definitive documentary on the behind-the-scenes machinations of an event known across generations throughout the western world.

The Planners
Mick Richards — producer, director, and editor of this documentary — is respectful of the young entrepreneurs who dared to produce this extravaganza: Michael Lang, Artie Kornfeld, Joel Rosenman, and John P. Roberts. The planners were young and, for the most part, inexperienced. Interviews, both past and current, catch the early impulsivity and the later incredulity.

The Challenges
Expecting maybe 25,000, and then expecting at most 100,000, almost a half million showed up on a two-lane road. Now how can the performers get to the stage?

New York State Governor Nelson Rockefeller wanted to send in the National Guard. Who got to deal with that and how was it handled?

Challenges like procuring a site, finances, electricity and sanitation are as mind-boggling as their solutions.

The Dangers and Accidents
When a storm pressed in, the first thought was that they hadn’t had time to stabilize the giant 500-600 pound speakers perched on the giant scaffolding towers. There was nothing to hold them on if the wind and sinking mud destabilized the scaffolding. The audience was in danger.

With all the rain the propped-up stage began to slip and sink.

A sad and avoidable death is explained.

The Players
You won’t really hear much music, but you will see people like Ritchie Havens being asked to entertain for hours before the other artists, who can’t get to the venue because the road is packed, can arrive. What does he do when told for the sixth time to go back on stage?

Learn which artists are left out of the line-up and which declined. At last learn why Jim Morrison refused to come.

The Participants
The people who came were kids. Some were prepared and some were not. See some of their makeshift weekend dwellings and their ecstasy in response to the music.

The Aftermath
What did the festival planners learn from this experience? What was Max Yaspur’s reaction to his farm being overrun? What did his farm look like after the festival? What tragedy happened in the clean-up?

“Creating Woodstock” is a fascinating film for Woodstock buffs. It’s title should have been “Loaded and Inexperienced: how drugs in the workplace can affect program management.” Though Mick Richards does not touch the drug scene, since one of the original planners was the owner of a head shop, it is reasonable to think that some of the irresponsibility was not only due to inexperience but a carefree, drug-induced irresponsibility.

What’s Next?
“Creating Woodstock” is strategically scheduled to open on July 30. Rumors abound that Woodstock 50 will occur this year from Aug. 16 to 18 in Columbia, Maryland at the Merriweather Post Pavilion. Like the original Woodstock, problems have plagued this plan for months and the planners are scrambling for acts. However, the word out is that Woodstock 50 Washington will serve as a giant fundraiser for nonprofits dedicated to climate change and voter turnout, so no matter what happens, there should be a silver lining.