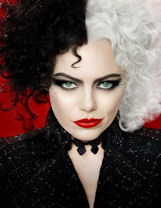 This is the origin story movie we never knew we needed. “Cruella” is an insightful, thrilling and beautiful romp through the ’60s and ’70s that sheds light on how a young, sassy and determined Estella evolved into Cruella de Vil, originally made famous/infamous in Disney’s animated “One Hundred and One Dalmatians.”

Where the original film had Cruella hell-bent on making a coat out of dalmatians – remember, Disney films back in the day were often seriously sick and twisted – “Cruella” skews with a different approach. Take what you know about “One Hundred and One Dalmatians” and check it at the door. Emma Stone creates a likable and sympathetic character who is talented, determined and will get her just due.

As the audience, we are treated to a film that meets at the enviable intersection of “The Devil Wears Prada,” “Batman Begins” and “The Joker,” albeit without the superfluous body count, and with much more style. The movie makes absolute genius use of iconic music from the ’60s and ’70s to give viewers the back story of Estella growing up in London and how she came to be a petty thief. From the outset, we’re all certain Estella is capable of much more … and then she proves it.

After spending nearly a lifetime of fangirling over the fashion designs and style of The Baroness (as brilliantly portrayed by Emma Thompson), Estella is handed an E-ticket into an entry level job at the design house, via her street smart thief cohorts Jasper (Joel Fry) and Horace (Paul Walter Hauser). In what could arguably be one of the most beautiful and dizzying continuous shots ever created through the design world and new workplace of Estella, we are given a glimpse at just how powerful The Baroness is.

Through a fun “accident” and alcohol-fueled bender, Estella unknowingly captures the attention of The Baroness and becomes the right-hand gal of the abusive designer who certainly takes whatever she wants, whenever she wants. As Estella gets a tidbit of backhanded praise here and there from The Baroness, Estella’s alter ego gleefully emerges as an anti-hero that everyone begins to cheer.

Setting the story aside for a few seconds, the fashion and design in “Cruella” is a worthy scene stealing co-star of the film and both Stone and Thompson showcase fashion in a way that is rarely seen in film today. As I sat in the theater watching the movie, I was nearly moved to tears several times at the costuming genius that permeates the entire film. I will be so bold as to say her work on “Cruella” will find costume designer Jenna Beavan bringing home another Academy Award to accompany the first one that she took home for 2016’s “Mad Max: Fury Road.”

As Estella delicately juggles her identity between her day job and her brilliant nighttime shenanigans as Cruella, the audience cannot help but love this new “bad girl.” In “Cruella,” the dalmatians really don’t serve as much more than a backdrop to an even more diabolical reveal about three-quarters of the way through the film, and what a reveal it is!

As Cruella takes over, the creative mayhem ensues, and she begins to exact her revenge. Every last detail is fashionably delicious, and leaves the audience guessing just how Cruella will rise to become victorious. I will not provide any spoilers through a movie review, however, if you are a fan of fashion, comics, set design, exciting movies or two-plus hours of outstanding acting, you owe it to yourself to see “Cruella.” The film is rated PG-13 and although it does not have any bad language, it definitely has some intense moments and a few scary scenes. 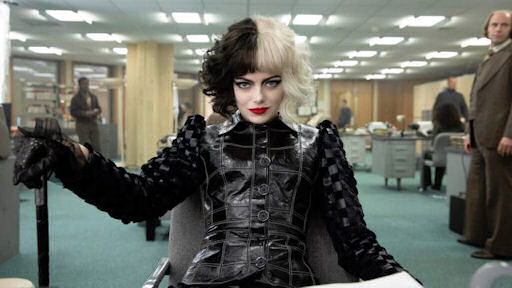