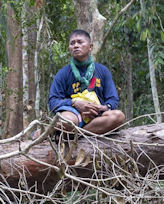 I’m sold on the cozy little tourist town with a warm, aqua-blue Neverland lagoon. Add to that abundant wildlife, jungle mountains and a beach Condé Nast rated the “Most Beautiful Beach in the World.” Palawan, the largest island in the Philippine province of Palawan, has been noted by National Geographic as “the best destination in East and Southeast Asia.”

So yes, I’m sold. As an added bonus I’d like to stop by the Palawan NGO Network Inc. headquarters and make a donation directly to Bobby Chan. He’s the local environmental activist with a law degree. Ironically, because this idyllic island contains “one of the oldest, largest and most diverse rainforests in the world, it is also one of the most dangerous places to be a land defender.”

“Delikado” opens with men sleeping on giant leaves, apparently oblivious to ants and bugs busily running over them. When the men rise they pray for safety. Then they each grab rice from a communal sheet and dump a handful on their own leaf (used as a plate).

They rise from their repartee as quietly as possible to pad barefoot or in flip-flops through the dense jungle. One of them knocks his tongue with a loud clicking signal. In the distance is the sound of chain saws. If the logging company look-out spots them, they are dead. So, they creep low as they inch forward.

Every time they ambush tree cutters, they show affection. One will put his arm around the cutter and assure him they will do him no harm. They don’t want to scare the worker into any kind of resistance or aggression. But they do dismantle the chain saw and lug it back to their base at Palawan where Chan anxiously awaits them.

Karl Malakunas, Australian journalist, filmmaker, adventurer and human rights advocate, traveled with this group of brave earth stewards. He was inspired in 2011 when he was the Manila Bureau Chief for Agence France-Presse. He was going over to Palawan to cover the tourism there and get a little r&r for himself. But then his tour arranger was murdered and he ended up covering the investigation. In 2017 he went back and forth until the pandemic, traveling with defenders in the lush Palawan environment.

Michael Collins, producer, remarks: “A war is being waged against the earth that we are dangerously close to losing. Land defenders in particular are on the front lines and dying in battle every day.”

Malakunas and his team have created a brave film, pointing a finger at corrupt politicians and revealing a cartel business far more dangerous than drugs. We travel with them through the jungle, sometimes successfully and sometimes, tragically, not.

Internationally premiered at the 2022 Human Rights Festival, “Delikado” will be featured at the Sydney Film Festival from June 9 to 11, 2022.