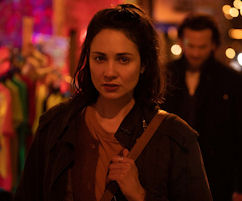 The child leaves her family and walks alone through the dark forest. This alone is cause for tension, even without the one-eyed boy. Bloody bandage over one eye, the kid is doing all right for himself, crouching to avoid the luxury car on the road above, conveying heinous intent for unlucky children. Abby, unsure of what she saw, returns to her family, but the memory persists until her return to the area brings it all back.

A frightfully pregnant set of possibilities is hamstrung by procedural execution in Albert Shin’s latest nail-biter. Co-written with debut screenwriter James Schultz, the movie has all the right pieces in not exactly the right places. Abby’s wonderfully checkered past of mental illness is not fully explained until the end of the movie. This is something that should have been exposed up-front, associated with the trauma of what she witnessed as a girl. Then the audience could stew about reality versus hallucination while the story plays out.

Tuppence Middleton plays lead Abby, the troubled woman with half of the answers. She has returned for her mother’s funeral and to sell her crumbling motel. Unfortunately, the motel is not all that crumbling. It is just cheap. There is a difference. Worse, Abby is all-too-like her sister Laure (Hannah Gross) who is supposed to be the complete opposite. The two argue about the inheritance, which is boring, when they should be arguing about Abby’s lurid psycho flip out a while back. Now, that is interesting, especially in light of her detective role in the upcoming mystery. Abby’s neutral introduction and the lack of suitably twisted mis-en-scene turns her into Nancy Drew and it is hard to develop her into a good creepy lead.

The sisters, although placed in the lead roles, are oddly upstaged by a quirky cast of supporting actors. Eric Johnson plays rich bad boy Charlie Lake with aplomb, not an overly difficult job considering rich bad persons are a dime a dozen in mystery movies. David Cronenberg emerges out of Niagara Falls in a scuba suit, an appearance more bizarre and mystifying than the rest of the film all together.

2003 Cannes Best Actress winner (“Invasion of the Barbarians”) Marie-Josée Croze steals the show in a walk as the female half of a cheap magic act under the hire of the manipulative Charlie Lake. With her husband as a prop, she threatens Abby in the most entertaining manner. Too bad she didn’t get more screen time.

For a movie to be disturbing, as this one intends to be, the critical characters need to be disturbed. Things seem oddly turned around in this screenplay. The supporting actors are disturbed and the lead performances normal. If the plot is going to be executed by Scully and Mulder, the story better be as strong, and original, as “The X-Files.” This story is good, but not that good. Possible Oscar nod to Maxwell McCabe-Lokos as Best Oxygen-Sucking Wheelchair Gimp, paralyzed and imprisoned by the redoubtable Bev Mole (Elizabeth Saunders). Better things to come from this cast and crew.