In a land of broken promises, the raw will to survive stands in stark relief. Desperate people do desperate things and the law that most of us have the privilege of following does not count for much. Such is the hardscrabble world of Jarhead Earl and his family. Set in a miasmatic, forgotten land, somewhere, anywhere, in rural America, meals are a daily struggle and peace is a dream. The fight against drug addiction, humiliation and despair are daily bread.

Jamie Bell completes a 180-degree turn from his BAFTA award-winning performance as Billy Elliot to execute the role of the forgotten Everyman Jarhead. This is an underdog movie with revenge flick undercurrents, but the lean and mean screenplay and stripped down settings take it outside those boundaries. That said, there is graphic violence and it is not an easy film to watch.

The atmospheric treatment of the final showdown between Angus and Earl refuses to kneel to a “Rocky” style Hollywood ending or climax a gladiator revenge plot of choreographed martial arts. The centerpiece of the story is the “donnybrook,” a bare knuckle free-for-all inside a chain link cage with a huge payoff for the last man standing. Even so, the fights are not elegant and masterful. They are clumsy, emotional Kurosawa Rashomon fights, furious and dirty, leaving only losers in their wake. The left behind fight the left behind to see who will live another tortured, forgotten day. Even the winners get no guarantees, just a reprieve to try again another day.

The canoe trip to the fight is a riff on the river trip in “Apocalypse Now,” Jarhead facing his destiny without either fear or courage, a simple commitment to do what must be done. The fight setting is torches and bacchanalia, an earthly entrance to Hades itself. A poor choice, the ending of the movie references the Civil War and identifies Jarhead with the confederate cause, which only narrows the statement and lessens the impact. Apparently set in the south, the myth/legend of a tale is better viewed as a statement about class identity and the will and responsibility to do the right thing.

In between the two, Angus’ sister Delia (Margaret Qualley) vacillates between being the devil incarnate and Mary Magdalen looking for forgiveness. Perhaps she is the liberal public, giving lip service to the worthy cause, but unwilling, or unable, to provide real help.

Based on the novel by Frank Bill, this story of marginal redemption lurches to and fro between message and gladiator violence. Even so, being only the fourth feature by Tim Sutton, it anticipates great things. 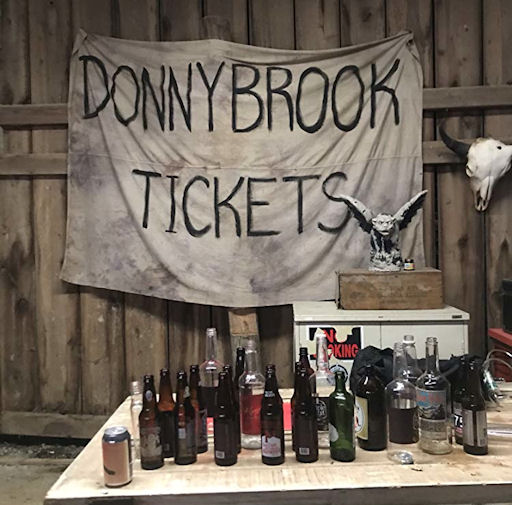