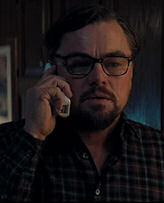 A giant comet, possibly 6 miles in diameter, is on a path to destroy habitation on earth. Dr. Mindy and his graduate student, Kate Dibiasky, warn the president, whose plan emerges: “Sit tight and assess.” Mid-term elections are coming up and her Supreme Court nominee has been exposed in a sex scandal. Who has time to think about the planet or, by the way, the people?

Leonardo DiCaprio certainly is a nerdy Dr. Mindy. He and his graduate student, Kate Dibiasky (Jennifer Lawrence), must convince the world, if not the president, that a comet big enough to destroy life on earth will be striking the earth in six months.

Replete with a gigantic painting of Nixon in the Oval Office, President Janie Orlean (Meryl Streep) is the epitome of a leader who is most concerned with re-election. Carefully not mimicking anyone we may know, her dramatically curled wig belies her shallow narcissistic values. To her credit, but also to deflect attention from the unraveling perversion of her Supreme Court nominee, she approves a master plan to attack the comet with a suicide shuttle mission alongside missiles to either attack the comet, smashing it to smithereens or possibly knocking it off course. We’re not told. However, just when her rockets of mass destruction successfully lift off, she calls them all back when an entrepreneur whispers how this potential catastrophe could be transformed into a lucrative boon for survivors.

“Saturday Night Live” Writer Makes it Big
This is Adam McKay, writer/director/producer, at his best. A wildly outrageous science fiction satire, “Don’t Look Up” is his Netflix baby, though he allows improvisations and collaboration, most notably from Meryl Streep for her inclusion of asking, as the president, how she will die, from Leo DiCaprio on one of his character’s final musings, and from Jonah Hill’s comment as the president’s son’s on getting a Like on his cell phone.

Famous for “Vice” and “The Big Short,” McKay is a prodigious talent. In 1995, at age 27, he was head writer for “Saturday Night Live” where he stayed until 2001. For the purpose of full disclosure, he identifies as a democrat socialist and endorsed Bernie Sanders in 2016 and 2020.

Apocalyptic Response to the Deniers
“Don’t Look Up” is specifically a response to science deniers, most notably those who deny climate change. Though concept and script were in the works before Covid came to roost, the film’s theme works for anti-vac folks as well. Deny the facts and you will suffer.

For those with specific questions about aspects in “Don’t Look Up,” like the feasibility of an object so large hitting earth, the US Planetary Defense Coordination Office explains that near-earth objects (NEO) are monitored and plans on how to either prevent or mitigate an earth (or sun) impact are in development. At present, astronomers calculate that over the next 100 years there will be no direct impacts with either the earth or sun.

Unfortunately, what Mindy and Dibiasky knew, is that if a huge item was hurtling towards earth, it “could not be shot down in the last few minutes or even hours before impact. No known weapon system could stop the mass because of the velocity at which it travels – an average of 12 miles per second” (https://www.nasa.gov/planetarydefense/overview).

However, Gerald McKeegan, an astronomer at the Chabot Space and Science Center in Oakland, reports that three plans to protect earth from an impact are in development. One involves deflecting a NEO from its orbit/trajectory. As a matter of fact, this plan will be tested next September on an outlying NEO. Other methods in process include a gravity tracker involving a spacecraft that uses gravitational force to lead the object from its path and a rocket thruster that is attached to the NEO to push it out of the way.

McKay hired Dr. Amy Mainzer as his top science consultant for “Don’t Look Up” to get the science for his film as accurate as possible. Formerly a senior research scientist at NASA’s Jet Propulsion Laboratory in California, Dr. Mainzer is a professor of planetary science at the University of Arizona specializing in NEOs. She is the one who determined that the object in the film hurtling towards earth should be a comet, rather than an asteroid, and what it would look like. She was also consulted about how to focus on the importance of science, and science denialism. Mainzer reported, “We covered everything from the importance of the peer review process to the visual effects” (Kay, Don. Den of Geek. 24 Dec. 2021).

Expendable Truth
The media does not escape a lampoon. Fixated on giving an audience what they think they want rather than the hard core truth, Brie Evantee (Cate Blanchett), hard and manipulative, and Jack Bremmer (Tyler Perry), congenial and naive, typify the networks that trivialize, misrepresent, or ignore the big issues. As personalities, Evantee is without morals or empathy. She is a utilitarian – what works is what sells.

What’s God Got to Do with It?
Whether it’s the end of the world, the death of someone you love or the end of your personal life, what might our (last) thoughts be? Would we look to God? McKay has reported that he was just trying to process “what the eff is going on in reality.” But his co-producer, Ron Suskind, asked him where faith was in this film. And that is why a skate-boarder, however ridiculous, comes to be connected to Jennifer Lawrence’s character and appears in The Last Supper. And it is this scene that is my favorite. Finally serious, finally with each other, and finally grateful, the scene at the dinner table is the most tender and meaningful moment in the film.

The Bottom Line
The approaching comet gives McKay an opportunity to represent science. Whether it’s about Covid or Climate Change, ignoring honest scientists like Dr. Mindy could lead the world to a precipice of No Return. The president, representing a brand of blind capitalism, narcissism and irresponsible self-interest, is a microcosm of the majority who elected her. She is Us and we are responsible for Her.


“Don’t Look Up” has been nominated for 19 awards and will be nominated for more. As far as acting, set design, screenplay, directing, and presentation go, McKay’s exceptionally important film will certainly be on Oscar’s Best Movie short list.