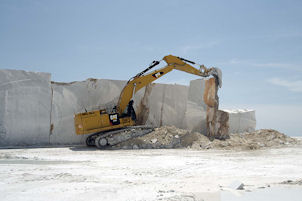 Each year the forces of nature, wind, erosion, tides and other, move about 60 million tons of surface soil. In that same year, humans move about 156 million tons. Humans have become a force of nature greater than nature itself. This stirring documentary takes the viewer to seven locations around the world where mankind is having its way with dirt. In each location, persons directly involved with changing the earth’s skin are interviewed for their motivations, reactions and concerns.

The photography is great, as expected of a Berlin Film Festival selection. The camera starts high and moves to ground level, the high shots showing the massive nature of the human intervention. The machines used for large scale excavation are like moving skyscrapers. Or, perhaps a moving pyramid or sphinx. The shots of these lumbering behemoths are as creepy as an animated mountain or a tree with grasping limbs. Climbing to the top of a ten-story tall conveyor boom and looking down, suspended over the earth, is a guaranteed heart-beater.

At ground level, the first few locations are routine; people doing what needs to be done to provide metals and energy for modern civilization. The bland interviews would have benefitted from the lonelier, more sinister treatment of man-inside-machine in Castaing-Taylor and Paravel’s 2012 “Leviathan.”

The tension ratchets up touring the failing underground radioactive waste site. Archival footage shows the drums of poison being carelessly dumped off underground cliffs , possibly rupturing on impact. The collapse of the site requires the relocation of thousands of drums of toxic waste. Just try and find a site that is stable for a million years. The logic moves from “This is what we have to do,” to “What have we done.”

The Spanish worker seems almost apologetic. “Humans are violent, so we are violent with the earth in managing our copper strip mine.” Workers comment on plowing through layers of the earth’s crust that have never been touched by man and navigating underground fossilized trees millions of years old. If even the smallest fraction of this disturbance turns out to be a bad thing, we could be in for it.

Like many “man vs. nature” films, this movie is influenced by the 1982 classic “Koyaanisqatsi.” It is no surprise that things have only gotten worse since then. The first issue is what could go wrong. The second is when it goes wrong, will we be able to turn it around? Our machines are big, but nowhere near as big as the earth they are affecting. The third factor is that regardless of feelings positive or negative, things are happening faster. At the Italian marble quarry, extraction is about ten times faster than it was two decades ago. The pressure is to make it faster still. At that rate, extraction will be 100 times faster in 40 years. 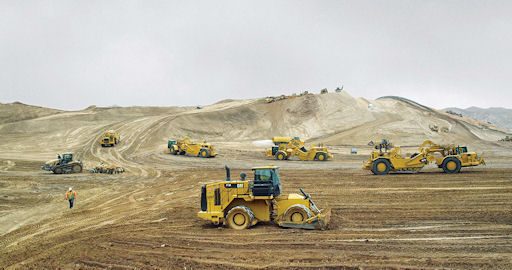