Review: Echoes of the Empire

It’s a seductive title with alluring history. The haunting vast steppes of Mongolia, the fascinating life story of the relentless Genghis Khan, and the current precarious predicament of the Mongol people are juxtaposed in this scenic film of cinematic grandeur.

Plus, since genetic testing and the alleged presumption that one in 200 of men in the world are descendants of Khan, knowing more about this homeland has become more and more meaningful.

The original greater area of Mongolia once included all of Asia, the Middle East and a sizable area of Europe. Now it is divided into two land-locked parts, the separate, sovereign country of Mongolia and the “Inner Mongolia Autonomous Region of China.” Director/Producer Robert H. Lieberman focuses on the independent country of Mongolia that celebrates Khan and the rugged, self-sufficient history on the Mongol people.

The most intriguing footage, after the telling of Khan’s genetic mark and surprising take-over, is of the gradual displacement of nomads who once spent their lives herding and hunting. While they used to erect temporary gers (aka yurts) on the steppes, now many are forming ger ghettos within the capital city, Ulaanbaatar, because their livelihoods have become unsustainable.

Why this change is occurring is investigated. Lieberman and his team not only research archives, they live in gers with Mongol families. We see grass floors, the insulated walls and nomadic cooking. Life is rough out on the steppes and the portable gers seem a little chilly. Sanitation is another issue.

The major investigative conclusion in “Echoes of the Empire” is that the primary culprit is climate change. Lieberman focus is on proving his contention that this has dramatically affected the fundamental herding and hunting traditions of the nomads.

Lieberman, Hoard and their team have painstakingly researched the history and modern times of the Mongol people. “Echoes of the Empire” is the third documentary in their trilogy of Asian studies. Their previous two documentaries, “Angkor Awakens” and “They Call It Myanmar” were New York Times Critics’ Picks. 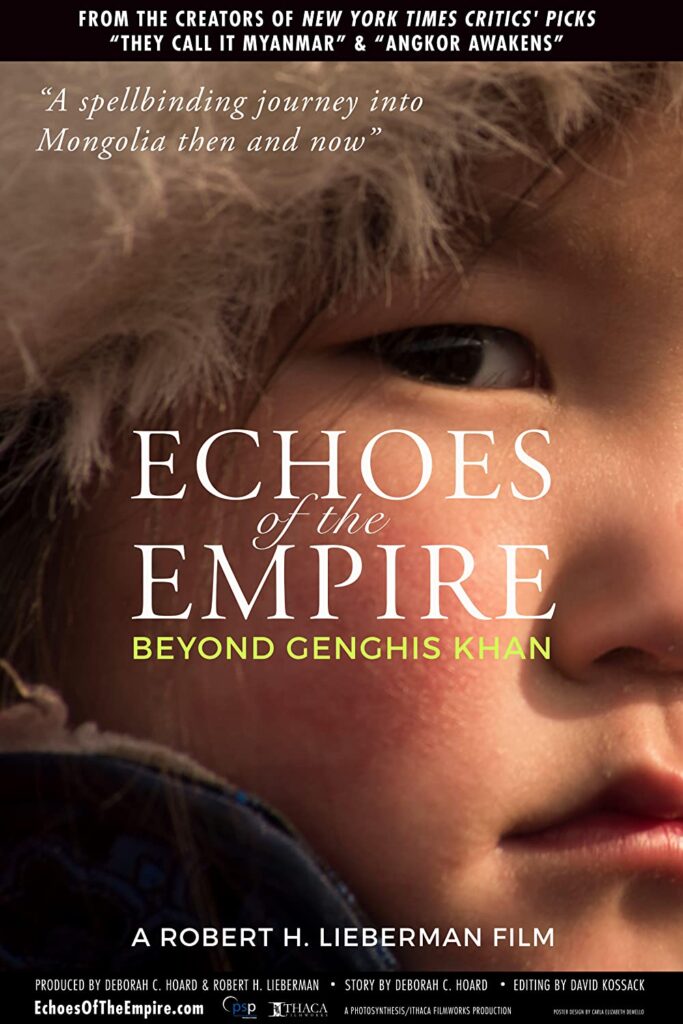 “Echoes of the Empire: Beyond Genghis Khan” — informative, picturesque and grandly cinematic — opened in theaters in Washington DC on June 3 and will open on June 20th in Los Angeles.