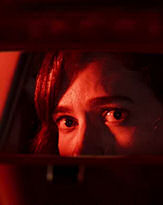 Allison Meyers (Lizzie Zerebko – “For the People”) is a frustrated woman. She is an architect who is without a job, and whose job search has so far resulted in nothing. She is also a person who, in voice-over, methodically describes her philosophy of developing a plan, carrying it out, and achieving the objective. And, she is a ride share driver. We learn all this in the first few minutes of “Endangered” (also known as “Fox Hunt Drive”).

We follow Allison through several pickups which, by her expression are disturbing, irritating, or boring.

Finally, well after nightfall, she gets a notice to pick up Neil. The pickup spot is a sketchy motel and at first it seems Neil will not show up. Then he does. The only problem is “Neil” in person is obviously not the “Neil” who picture accompanies the ride request. Despite this, she allows this stranger to talk her into giving him the ride. He settles into the back seat with a gym bag. The passenger is played by Michael Olavson (“Orders”).

As the drive progresses, Allison becomes more and more apprehensive about her mystery rider and her own safety. It is this tension, so well brought out by Lizzie Zerbko under the direction of Drew Walkup (“Hacker Labs”) that drive the plot. There are many twists and turns to this adventure; we are passengers just as much as the two people in the car. Nothing is as it seems. This is reminiscent of the films of Hitchcock, DePalma and Shyamalan. The acting is first rate throughout as our sympathies are aroused first for one character, and then another.

Most of the action takes place outside at night, much in the car Allsion drives. Sets are well lit and realistic. There is a particularly interesting vignette in a drug house reminiscent of the place “This is It” in David Lynch’s “Blue Velvet” (it can be seen on Youtube.) In Walkup’s version you may especially enjoy meeting “Cathy’s Mom.”

“Endangered is a small film, but one well produced with excellent cinematography, dialogue and a properly muted musical score. The acting is superior. The editing, by the director, is tight. This modern day film noir will surprise you.

So buckle up and take it for a spin.