Gianfranco Rosi’s genre bending documentary “Fire at Sea” is two stories. The first is the story of 12-year-old Samuele growing up in the Garden of Eden environment of Lampedusa, an island 200 kilometers south of Italy in the heart of the Mediterranean Sea. The second story is of the hundreds of thousands of refugee emigrants who flee to the island on their way to Europe and pay the dearest costs imaginable to do it. 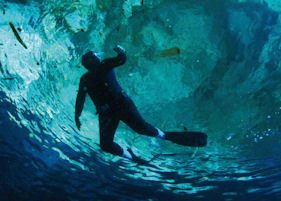 The film won the Golden Bear, the highest prize awarded for the best film at the Berlin International Film Festival, as well as the Fipresci Ecumenical Prize. It is rare for a documentary to win the top prize. This film did it because it transcends documentation and weaves a complex narrative of culture and time.

Rosi went to Lampedusa in 2014 to make a 10-minute film about the incredible contrasts that that the flood of immigration has brought to this isolated, traditional community. He ended up spending a year on the island and filming dozens of immigrant landings. He also filmed hundreds of hours of the day-to-day life of Samuele, his family and friends and the other key people in the 6,000-person township.

Samuele is the son of a sailor. Many of the people on the island are sailors or related to sailors. His father devotes his life to the slow and patient familiarization of his son to the sea. Samuele shoots his slingshot which he has made himself from the local trees. His father takes him out on his boat. The local doctor treats him for lazy eye.

At the same time, refugees are drowning off the coast by the thousands. There is no learning period for them. A magnificent song performed by Nigerian immigrants describes their flight from the bombs of their country. That takes them to the Sahara Desert where they are raped and killed and the survivors forced to drink their own urine in the course of dying of thirst. They flee to Libya where they are imprisoned for being Africans and held without food. Then they escape to the sea where they die of starvation, dehydration or drown when the smallest storm overturns their rickety boats.

There is a third story as well, the story of a lonely disk jockey in the radio booth playing the songs that are the heritage of the island and the country, a land that is losing its innocence, and the story of Dr. Pietro Bartolo who is tasked with resurrecting the nearly dead and performing autopsies on those for whom it is too late.

The brilliant cinematography, mostly using the sea as a timeless backdrop for the staging of the ultimate crisis, contrasts the patient and uncompromising sea with the fragile nature of man and his culture. The reverberations of international greed and its first cousin war are lapping at the shores of Lampedusa with a massive tidal wave of cruelty that threatens the sanity of the people there.

The sound track alternates the gentle sea sounds with the cries for help that come in over the radio every day and the timeless songs that emanate from the isolated radio station. Too much information, too little time.