Review: Fire in the Mountains

A sari-clad woman, Chandra, walks across a one-lane northern Indian bridge leading into Sarmoli, a tiny village close to both the Tibetan and Nepali borders. She successfully competes with a hotel hawk for a family just off a bus. Then she sets their suitcase on top of her head and leads them up the trail to her modest mountain homestay that has a view of the imposing Himalayas. Chickens and goats meander in the yard and there is a quiet serenity from the busy road far below.

But “Fire in the Mountains” is not about an idyllic existence. Instead, it is about the beast in the garden, the leopard prowling in the lush vegetation. It is about relationships gone wrong, even in Shangri-la.

Chandra’s husband is an alcoholic who falls over in a stupor, loses his pants and is the laughing stock of his family. This means that survival is up to Chandra, but she is capable. Not only does she haul suitcases on her head, that is also how she brings in hay for the animals, and water up from the stream. She cleans the house, cooks, brings in travelers as paying guests and knits. On top of this she has two children. One, a 10-year-old boy, she must carry on her back because he does not walk.

Her husband, Dharam (Chandan Bisht), in distress over the inexplicably immobile son, goes to a shaman for advice. The magical seer goes into a frenzied fit and ends up telling him the child’s immobility is related to his wife running the household.

Instead of becoming sober, sharing in the work of the family or getting a job, Dharam thinks the road to being a true head of household is to beat his wife and steal all the money she has secreted away for their son’s medical bills and basic survival. His misunderstanding is the essence of the beast in the jungle forest.

This film is Ajitpal Singh’s directorial debut. The death of his female cousin, the only one besides himself in his family who chose to be educated, inspired him to write this film. He has written that Chandra is “up against a superstitious and patriarchal society.” He notes that as India advances in education, technology, information data and reliance on money for work, the very fabric keeping families together is disintegrating.

“Fire in the Mountains” juxtaposes traditional beliefs, like the use of shamans, against modern changes, like the ambition of women, into an explosive caldron. The leopard of the unknown lurks, provoking fear.

Ajitpal has written that his intention is “not to take a side, but explore and question.” His work is a master class in the metaphors of social justice and moral challenge.

“Fire in the Mountains” had its world premiere at Sundance in 2021 and it won The Audience Award for Best Feature at the 2021 Indian Film Festival of Los Angelos. It will have its US theatrical premiere on May 20, 2022. 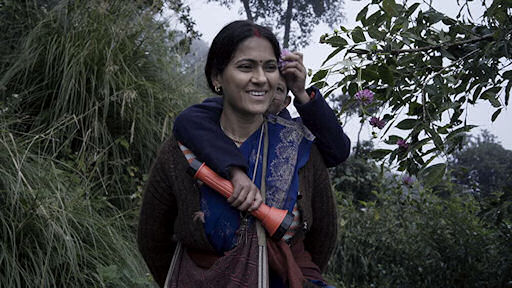