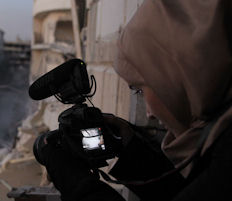 On January 29, 2013, Aleppo woke up to a new massacre. Men with hands bound were found with gunshots in their heads floating downstream like trash bobbing on the current.

A Syrian woman, Waad al-Kateab, now lauded as an award-winning photojournalist, filmed her experiences beginning in 2012 when the Syrian Civil War began. With her cell phone, she caught the first angry revolt outside the Presidential Palace in Damascus as well as the riots and gruesome shootings in Aleppo.

She was 26 when she first took up her camera. She had always wanted to be a journalist, but her parents had feared she’d land in jail. However, she still ends up filming everything, fearful that the next day she or the friends she films will be no longer.

She falls in love and captures her small wedding to a medical student named Hamza. He ends up choosing to stay in Syria to help run an underground hospital. Since he can never leave this place, his wife and eventual daughter live there with him.

Waad al-Kateab documents everything: the gore, the miraculous, the grief, and the love. She takes the camera into the hospital where she documents harrowing attempts to save the wounded as well as a spell-binding attempt to save a newborn baby. He also captures her own labor and the birth of her daughter, Sama.

The movie is narrated in the format of a loving letter to this innocent, soft black-haired child. She tries to explain the bewildering circumstances of a once peaceful Aleppo. She records for Sama what life is like during the civil war in Syria and how the people cope.

Education is provided secretly in basement rooms. Patients are saved through perseverance and resilience more than through supplies and equipment. Going to a grocery store is a challenging ordeal and their existence, as they know it, is all underground.

Waad al-Kateab and her husband wrestle with an instinctual drive to flee Syria to save their daughter and a conscientious obligation to stay to help save their country.

Co-directed with Edward Watts, a documentarian associated with British television networks, Waad Al-Katea’s documentary, “For Sama,” has won 20 awards, including the Best Documentary Award at the 2019 Cannes Film Festival. Watts contribution was helping Al-Katea shape her hundreds of hours of footage into a personal story where she explains to her daughter the tragedy of the ruthless Assad regime. 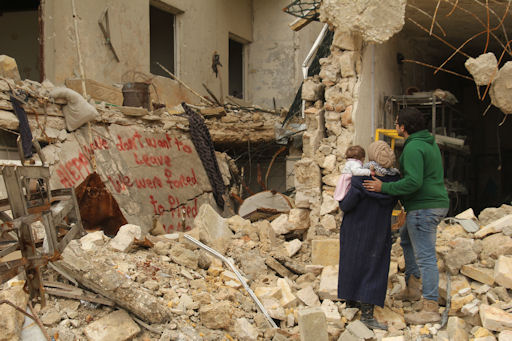 “For Sama,” an eye-opener on the excruciating decisions Syrians must make during one of the greatest humanitarian crises of our times, opened in theaters nation-wide on July 26 and is currently being featured at the Northwest Film Center Aug. 30 to Sept. 1 in Portland, Oregon.