Review: I Am Vengeance

Ex-mercenary turned soldier, or soldier turned ex-mercenary, or mercenary turned gangster. There are lots of ways a writer/director can turn the trope. In the end none of them work but because they have all been done far too many times before. 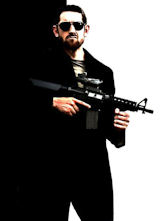 In writer/director Ross Boyask’s stab at the black knight in search of redemption story, Afghanistan is the dark past that has made this super-human killer what he is. Interesting enough, Viet Nam is yesterday’s news, Afghanistan is the new training ground for semi-deranged ex-military. Even so, Stu Bennett, playing veteran Special Forces something-or-other John Gold, channels Sylvester Stallone’s Rambo right up to, but, thankfully, not including his trademark sneer. His clothes are also much nicer; the redneck southern burlap having been shucked in favor of Regent Street military.

No matter, Gold eschews camouflage of any kind. When he wants intel he simply walks into a bar of acknowledged killers and demands answers. Things work differently in England than in the Ozarks, when such demands might result in a simple knife in the back or a slug from a rusty Saturday night special. In this flick he gets answers and a downright polite invitation to go out in to the parking lot and fight it out, loony to loony.

Sadly, the audience sees the beginning, middle and end of this fight before it even starts. A couple kicks, chops, flips and its done and on to the next scene. This pervasive, ill-acted and robotic brutality pervades the film, which seems to rely on professional wrestler type bodies to carry the day. Hopefully, Boyask is just getting his feet on the ground with this cloddish screenplay and better things are to follow.

The acting is not so much facial expression and body language as it is, well, body builders in tight shirts. Think “Bay Watch” meets Dirty Harry. There is a strong undercurrent of good old American white trash bikers, biker bars and biker babes, as if the British B action film establishment is thinking, “Those Yanks will buy anything.” Gold drives a vintage GTO, of all things, much too clean and shiny. Nick-named the “goat” in its hay-day, the GTO was a poor-man’s muscle car even then. Perhaps the thinking was that if Clint Eastwood could do it with the Torino, anything was possible. But shined up like a prom-night special it looks like a spoiled kid’s pride and joy.

The sound track is a high point in the production. When it rocks, the music is tow tapping good. At other times there is a soft-peddled jazziness that goes with the understated Mr. Gold. Like Gold, it is too understated at times, but this movie is a good start.

The final shootout is so devoid of any invention that it is almost a self-parody. There is no joy in the routine offing of the bad guys, only the assurance that more will take their place. Sure, this is a revenge flick, but it is not a good idea to throw that in the face of the ticket-buying audience.