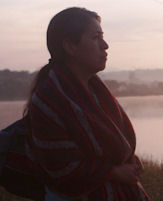 The trope of wanting to know something that could kill is such a staple of Western crime stories we hardly know it is there. It takes powerful voices and acting to remind us that this kind of knowledge is a real thing. Magdalena hears this kind of information whispered by a terrified unknown woman separated by a toilet stall and from a nearly blind old man. The universal advice is to go home and stop her search. Her son is dead.

The movie begins with the camera looking out the house doorway into the beautiful wide world, the big sky of central Mexico. Jesus (Juan Jesus Varela) tells his mother Magdalena (Mercedes Hernández) that he is going to cross illegally into the US to find a promised job. He leaves with Rigo (Armando García) the son of Magdalena’s friend Chuya (Laura Elena Ibarra). After weeks of no word, the two mothers go to the authorities to search for their boys. Rigo’s body has been recovered and has identifying features.

Magdalena is presented with a corpse burned beyond recognition and given papers to sign, which she cannot understand, to confirm it is her son. The authorities tell her blood tests have confirmed it is her son as the look in her eyes tells us this is a lie. Whispered voices later tell her, and us, the blood test story is a fake to stop her from asking further questions.

Fear is everywhere around the border crossing, an area of hundreds of square miles controlled by drug cartels and human trafficking gangs. The mother’s search for her son evolves into our search for what has brought the devil to Mexico. Is it the corruption of local officials, or greed? Or is it our own American taste for drugs we, as a nation, prefer to pretend does not exist?

Magdalena’s journey, alone, is a wondrous, harrowing and courageous dropping into the unknown that is a beautiful movie all by itself. People help her at every turn and at every turn she is reminded they are risking their lives to do so. Cinematographer Claudia Becerril Bulos uses well executed long takes and creepy night sequences to saturate the screen with the presence of the devil. Bonfires used to burn the dead summon him up in the depths of the night and the ghosts of the slain turn the sky upside down as hope is lost.

Valadez co-wrote the script with Astrid Rondero immersed in magic, especially powerful through the words of the indigenous old man (Manuel Campos). Nearly killed when his bus is hijacked by cartel sicarios, his vision is too blurred to identify a photo of Jesus. Perhaps his vision is blurred, like ours, because he can no longer bear seeing.

The film’s sound team and composer Clarice Jensen builds this sense of foreboding with a stirring score punctuated by throwaway sounds such as distant gunshots and dislocated auto engine sounds in the night. The combination of sound and ultra-realistic acting and cinematography landed this film both Sundance both Sundance awards and a spot in the annual NYC New Directors / New Films series.

With acting and locations so real the first half of the film looks like a documentary, we are immersed in fear ourselves and imprinted with the indelible message that in this place and time all hope is lost. In In the quest to do work that no one admits exists, we have created a space where carnal knowledge rules and life has no value beyond the ability to kill. The mother and the old man live on even as they question why.