The movie opens with a real lab, real humans and real weird gadgets. The men act like doctors, only they are healing mysterious forces beyond the comprehension of normal mortals. They have some sorts of infrared goggles, like you would use to view an atomic bomb, or take with you when interviewing glowing aliens for the first time. This will be a cool movie, like a real life Frankenstein. 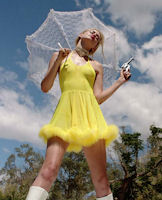 Edwin Land comes on like Rod Serling (“Twilight Zone”) and delivers a straight faced description of actual real sci-fi stuff. Fantasy described as normal as the sunrise, and just as unavoidable. In post WWII America we had everything, but we wanted more. We wanted everything, only we wanted it now. Waiting was not an option in the brave new world of technology.

Land got the word from his eight year old daughter, and it resonated with him. In a blizzard in New York City in 1947 he debuted his idea at the American Optical Society annual conference. It resonated more, eventually to the tune of a billion photos a year. Instant dreams, in more ways than one. Americans did not care that the pictures they were taking were trash. Commanding an instant picture was like controlling time, freezing it and then giving it permission to move on.

Ten years ago Polaroid gave up the ghost and stopped making film. Some remains, locked in freezers here and there since it is fragile and unstable on the shelf. It will degrade and get used over the coming years, expiring like the half-life of radium. In film maker Willem Baptist’s story, he digs up the few remaining worshippers of the Polaroid format, their last film packets hoarded in secret refrigerators like post-apocalyptic ice cream, their last cameras like Cadillacs craving gasoline.

The photographer takes what may be the last Polaroid art pictures. These scenes weave in and out, challenging the viewer to pin them to a meaning. The scientist wanders around with a camera around his neck, absurdly clunky and outrageously out of place at the cocktail parties he frequents. Is this the ultimate pick-up hardware, or the perfect mane for the neck of the prehistoric lion? It drips levers, lenses, stainless steel, leather and fabric; unabashedly undressed, innards hanging off. It is so out it is in.

People born after the thrill died look at the instant pictures with curiosity. This was a big deal? It is like a picture on a digital tablet, except it cannot be sent anywhere, unless one goes to a post office, wherever that is. The point, the photog tells us, is that every picture is unique. There is only one. No negative, no electronic file. Just as well, the viewer thinks, since most were useless anyway. But that is not the point. Humble in their magnificence, they do not pretend immortality. Just the opposite, they expire faster than old tires.